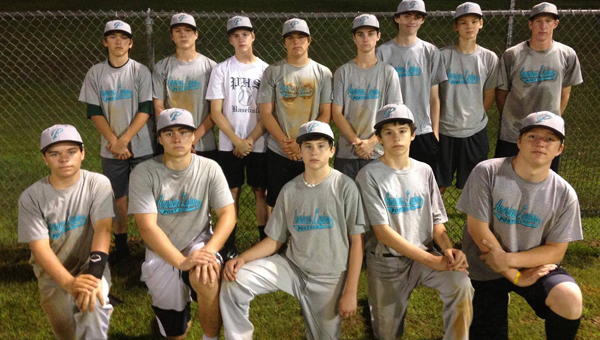 PELHAM—Summer baseball is heating up as American Legion Matthew Blount Post 555’s team prepares for its district tournament July 9-12 at Pelham High School. This is Post 555’s first year providing a baseball program, and the team has only lost one game so far this season.

“It’s been a lot of fun,” said Alan Phillips, program manager for American Legion’s Baseball team. “I think the parents have been very enthusiastic with the kids’ performances and the legion members themselves have enjoyed interacting with these younger men as well. It’s been a good situation for both parties.”

A total of six teams will be playing in the tournament that weekend, and the winners will move on to state tournament at Troy University the weekend of July 19. The team will play about 20 games this season, including the tournaments.

American Legion groups usually offers three baseball programs for the summer season: a 19 and under group that allows high school graduates to participate, a high school eligible team and a junior division 15 and under team made up of freshman and middle school students.

This year, Post 555 only had one team in the high school eligible category because the post just started in January.

“For a post to start a baseball program in its first year of inception— it’s unusual that they have been able to do that,” Phillips said. “The post has been very successful in various endeavors and baseball is just the latest one.”

He accredits Post 555’s ability to have a successful team already on the success of the surrounding schools. The team is mostly made up of Pelham and Helena High School baseball players, and Phillips said those schools have great baseball programs.

Post 555’s established relationship with the community and the school systems is another factor, Phillips said. The post hosted a flag ceremony for Pelham High School to retire the 20-year-old flag that flew over the baseball field.