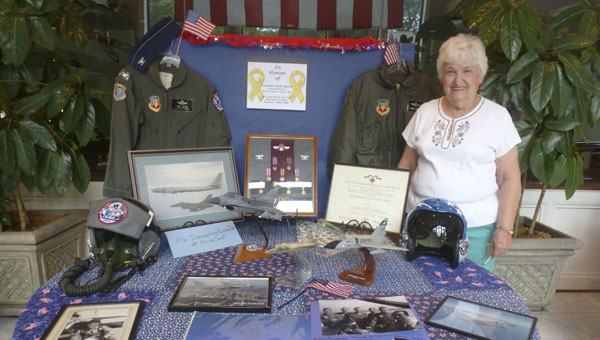 One of the annual highlights of Liberty Day, which will be June 26-27 in Columbiana, is the annual Hall of Memories celebrating local veterans at the First Baptist Church of Columbiana.

Started 18 years ago as the brainchild of Minister of Music Charles Powell, the entrance and halls of the church are filled with exhibits which show the memorabilia, pictures and history of approximately 30 veterans.

Hall of Memories will be open Saturday, June 27 from 9 a.m. to 3 p.m. in the cool air-conditioned church.

“This was my idea,” said Powell. “When we came of staff here 20 years ago, I was so impressed with the Liberty Day celebration, and we wanted to do something to enhance that day in our community. So we started Hall of Memories.

“We had about 10 exhibits the first year, two of which my wife and I did myself. It has just grown from there. I am the person in charge who organizes and is in charge of the day, but it would not be possible without our veterans.”

“Our exhibits are so varied,” continued Powell. “Almost every war in our country’s history is represented. One of the most interesting exhibits has been Allen Cousins, who is a revolutionary period artifact collector.

“We hope to have him participate again with his “Founding Generation” exhibit. You will see pictures of people you know and learn about their service to our great country. It is impossible to come to the exhibit and not be moved by how God has used brave men and women to bless our nation and give us freedom that we enjoy every day. We are truly blessed!”

“We are still signing up exhibits for Liberty Day 2015, said Powell. “We will always make room for one more. If anyone is interested in a half or full table, they can call the church and reserve one, 669-3128.”