Datcher reflects from slavery to freedom 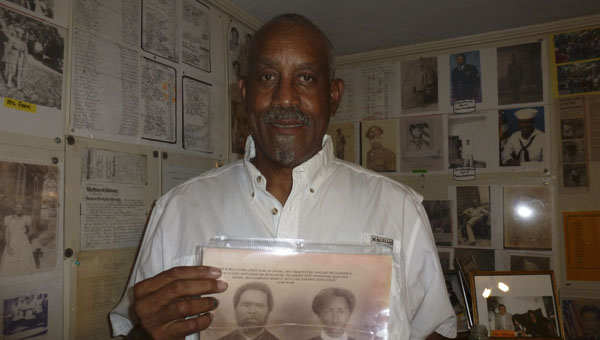 Albert Baker Datcher, Jr. known as Pete, holds the picture of his slave great-grandparents, Albert and Lucy Baker, in the Harpersville home where six generations of his family have lived including great-grandmother Lucy Baker. The house is a museum of memorabilia and artifacts of black Shelby County families from slavery to present day. (Contributed)

He has made it his mission in life to preserve the history of the black man in Shelby County that rose from slavery and despair to freedom and hope.

“Every once in your life, God has something for you to do,” said Datcher. “I learned that my great-grandparents were slaves when I was l young. My mama would tell me the family stories and they became seeds planted in me.

“In 2000 when I was 50, I was walking in Baker’s Grove Baptist Church Cemetery where many of my family are buried. I was looking at my great-grandfather Albert Baker’s grave, 1812-1917, and realized that he became a freeman at my age! He was a slave the first 50 years of his life. After his freedom, he married, had children, founded this church in 1870 and became a landowner buying 100 acres of land in 1879. He did all this after the age of 50 to provide a stable home and plant roots for his family. I had to find out about my heritage.”

Datcher went to the Columbiana Ward of the Church of Jesus Christ and Latter-day Saints on Egg and Butter Road and sought help from the Mormon Family Research Center.

For the last 15 years he has spent thousands of hours doing research and collected hundreds of black artifacts.
He has been awarded the Adelia Childs Award for Historic Preservation by the Alabama Historical Commission for his major contribution in preserving black history in Shelby County.

The amazing Datcher Collection at the Alabama Archives in Montgomery has part of his memorabilia including his ancestor’s midwife journal and uniform.

Part of his collection was displayed in the “Alabama Voices” exhibit at the Alabama Archives.

His grandparents’ home in Harpersville is filled with the history of the black man in Shelby County.

“My number one purpose is to find and tell the history of black people in Shelby County. In the ‘Heritage of Shelby County, Alabama’ only 3 percent of the information is about blacks. Black people have been in Shelby County since its beginning and their story has been untold. I want to tell the story for history untold is soon forgotten.”