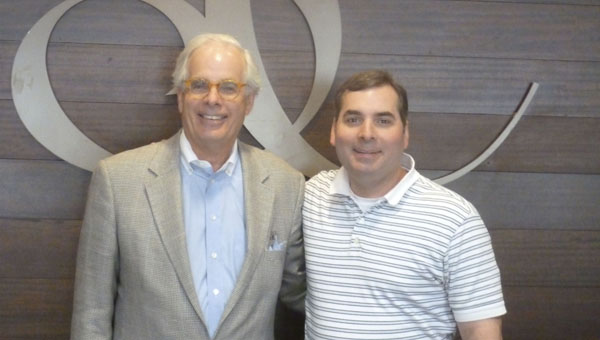 The transformation of the blighted Moore-Handley site into Summer Classics’ exquisite headquarters is a story that today’s “American Dream” is alive and well.

It caps the career of an incredibly ambitious entrepreneur with a fantastic nose for the market and a quest to create a business from the ground up.

William Bew White III, known as Bew, is the man who created Summer Classics and “constantly follows the market.”

Son William Bew White IV, known as William, has joined the business to carry on that mantle with the Gabby indoor furniture division continuing to keep current and even ahead of today’s market.

Textiles were bred into Bew growing up in the family business. His great-grandfather was Braxton Bragg Comer, former governor of Alabama and founder of Avondale Mills, a textile company.

Bew grew up considering working in the family textile business, now owned by his family and many cousins.

He studied textiles and graduated in textile engineering from Auburn University, where he married his beautiful wife and “help-meet” Wendy on July 29, 1972 at age 22.

After graduation, he went to work as Avondale’s sales person in New York with the Northeast as his territory.

He had many clients from Ohio, Michigan, Pennsylvania and New York and personally took care of accounts such as K-Mart and JoAnn Fabrics.

But a change began in his heart to do something on his own.

“I took a risk and decided to start my own company; I wanted my own business,” said Bew. “If my great-grandfather could start a company and build something from the ground up, then I felt that I could. I wanted to achieve something on my own merits, not by my blood. My goal was to earn a million dollars before I was 40.”