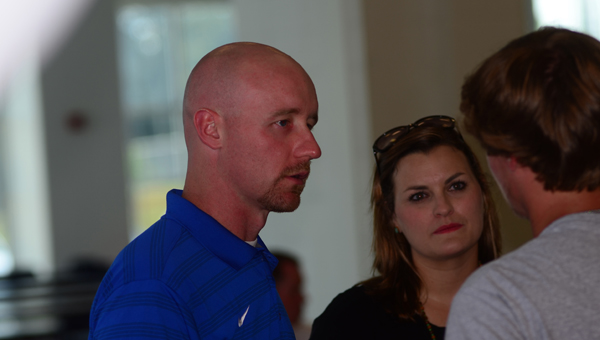 NORTH SHELBY – Derek Irons, the new head coach of the Oak Mountain High School baseball team, met his players and their parents for the first time on June 24 at the high school. There was an obvious sense of anticipation and excitement in the air as the Oak Mountain administration welcomed one of the most sought-after high school baseball coaches in the state into its ranks.

Irons’ achievements have been often noted in the past few weeks after he decided to leave his long-term post at Charles Henderson High School, where he won back-to-back state championships in 2013 and 2014 and posted an 87 percent winning percentage in his last three years in Troy (116-17). Oak Mountain has, by comparison, amassed a pedestrian 90-82-1 record over the last five seasons under former coach Brian Breeze and has not seen the second round of the playoffs in the last four seasons. Landing Irons is Oak Mountain’s signal flare that it is attempting to be competitive in the toughest baseball region in the state.

As he has said time and again since he decided to move to the Birmingham area, the job and situation had to be close to perfect for Irons to consider leaving the comfort of the life he had carved out in Troy. Many suitors came calling over the years, but none felt right, until now.

“After coming to talk to (principal) Dr. Sayers and Mr. Hogue, I was so impressed with the school and the people that are there,” said Irons. “The importance of baseball to the community is obvious, kids will be interested and competitive. It’s a great place to live and work and raise our family.”

One of the reasons Irons has been able to achieve and maintain such high levels of success over the years is the impact he places on relationships with his players, which is what he said he wants to hang his hat on.

“That’s why I do this. To build those relationships with kids, to help them be successful. At the end of the day, you win some, you lose some. The impact I have had on my players is the legacy I want to leave.”

In Irons’ case, he has generally won a whole lot and lost rarely, which is the other side of the coin. A byproduct of his relational mentality is usually an upswing in on-field production. Relationships impact performance, and positive relationships between players and coaches frees up kids to just go play, Irons said.

“In those big games and big moments, kids know I’ve got their back no matter what,” Irons said. “It frees kids up and relaxes them and allows them to just go play.”

At the moment, Irons is not sure when summer workouts will start because he’s not even sure where he is going to live. He and his family have to iron out some of the minor, and major, details of moving to the Oak Mountain area, but Irons is ready to get going, and meeting the kids who will populate his roster in the coming year was just the first preliminary step.

“It went great, we had a great turnout. My wife and I felt very welcome,” Irons said. “Hopefully we’ll get started by the end of July.”