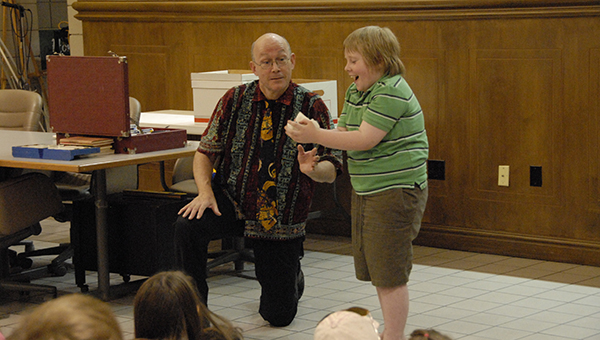 HELENA–Families and kids who visited Helena City Hall on Wednesday, June 24, were in for quite the show, as magician Russell Davis showed off his various tricks and wowed the audience in attendance.

Davis has been obsessed with magic since 1970 and has been performing magic professionally since 1987. He said he got his start in magic by reading a lot of books on magic tricks and he wanted to stress to the kids that reading is an important skill to have and practice.

“I used to go to the Huntsville Public Library in the children’s section and they had a bunch of magic books,” said Davis. “The adult section, to my surprise, also had different magic books and I went to both sections back in the day.”

Davis performed different tricks that included switching little fake rabbits from one hand to the other, having a bookmark, folding it, and then pulling one of the rabbits out of it, various balloon tricks, card tricks, invisible ink tricks and more.

Davis described some of his favorite things about performing and what makes magic special.

“I like to see their reactions and perfecting a trick,” said Davis. “But also, there’s sort of a sweet spot when you start a magic trick and you get all of the technique down. You’ve got a lot of the lines in place or the jokes and timing and so there’s some point when the trick really is about as good as it’s going to get.”

Davis called on several volunteers to help him perform a few of his tricks and one of the best parts of the show was when he called on Seth Hamilton to help him with a trick.

Davis placed a small, fake rabbit in Hamilton’s hand and when Hamilton would slowly close it and open it back up, more rabbits would appear to Hamilton’s astonishment, as he yelled “I love magic!”

Davis spends most of June and July on the road traveling to perform for various summer reading programs around the state.

The Helena Police Department will make a visit to the reading program on Wednesday, July 1, at 2 p.m.