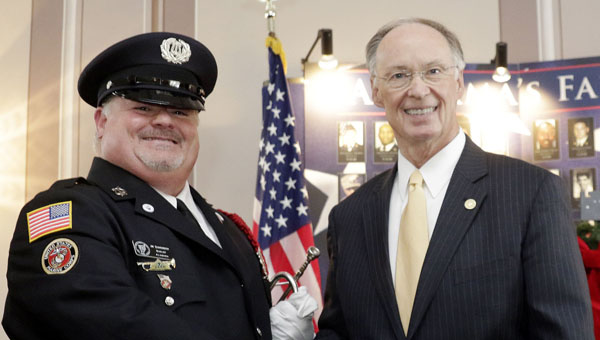 U.S. Marine Corps Veteran James Quakenbush volunteers with Bugles Across America, the non-profit organization that provide free “live” music of Taps by volunteer musicians at military funerals. Pictured are Quakenbush with Gov. Robert Bentley at the Wreaths Across America at the State House in Montgomery in December 2014. (Contributed)

James Quakenbush has a God-given gift of music.

Beginning at the age of 12 in middle school when he first picked up a trumpet, music is his passion and more.

“Music has been more than simply my passion from the time I picked up a horn,” said Quakenbush. “I have found music to be the conduit through which I am, allowed to express and develop myself, often to a level equal to spiritual meditation.”

After graduating from high school and several years in college, Quakenbush enlisted in the U.S. Marine Corps in 1983.

“As any Marine will tell you no matter their MOS (Military Occupational Specialty), I was first and foremost a Marine Corps rifleman and fire team squad member,” said Quakenbush. “After completing recruit training on Parris Island, S.C., I received instruction at the Armed Forces School of Music in Little Creek, Va. Upon completion I was sent into the field as a Marine musician. As with all field musicians in our Corps, I performed in a wide array of musical ensembles (i.e. drill, concert, jazz, show bands, etc.). My other duties included administration clerk, platoon sergeant and training officer. I performed Military Honors (Taps) as well as morning and evening colors for the bases on which I served.”

After Sgt. Quakenbush’s detachment from the Marine Corps in 1991, he has continued his professional music career playing as a studio musician, in symphonies, teaching and solo gigs as JQ’s One Man Big Band.

He also volunteers with Bugles Across America.

“After my first time to do Honors at the Alabama National Cemetery in Montevallo, I learned that due to budgetary cutbacks, there was a shortage of available ‘live’ military buglers,” said Quakenbush. “The military had instituted widespread use of pre-recorded Taps to fill the need. Although I appreciated the concept to remedy this situation, I found the reality of the solution distasteful. Bugles Across America was the next logical step. As a national non-profit organization founded by Tom Day (former Marine) in 2000 with well over 5,000 qualified active members, we are completely self-supporting in our efforts to provide live buglers at no cost to the families. Though I have no idea how many times over my 35-plus year musical career I’ve sounded the 24 notes of Taps, each time has been, and will continue to be, a deeply felt honor. For me, service to others is all that matters.”

Datcher reflects from slavery to freedom