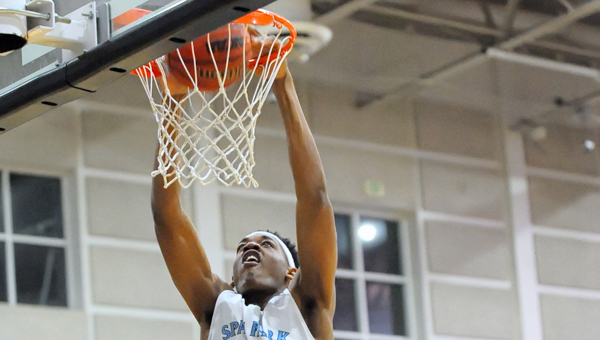 Spain Park’s Austin Wiley is ranked as the 10th best player in the country for the class of 2017 by Scout.com. Pelham’s Alex Reese also made Scout.com’s list, coming in at No. 48. (File)

The world of recruiting and ranking players is by definition subjective, and that reality is only magnified in the grassroots, ever-changing landscape of high school sports. Kids develop on different trajectories, and some come on the radar of college coaches and recruiters much later than others. Rising juniors Austin Wiley of Spain Park and Alex Reese of Pelham represent opposite sides of this scale.

Wiley, a 6-foot-10-inch, 230-pound center has been on the map for a while. In his sophomore season, Auburn coach Bruce Pearl was in the stands for his game against Reese and Pelham, and he has garnered offers from Alabama, Auburn, Kansas State, Mississippi State, Texas A&M and UAB among others while drawing attention from blueblood programs such as Duke and North Carolina. He has long been in or around the top-10 for the class of 2017 in a number of national high school recruiting websites, and in Scout.com’s most recent rankings, he is ranked as the 10th best player in the country.

Reese is a contrasting case. The 6-foot-9-inch, 220-pound power forward has shot up more than seven inches in the last two years, coinciding with his leap onto the national recruiting stage. Relatively unheralded even after a sophomore season that saw him receive a scholarship offer from former Alabama head coach Anthony Grant, Reese has begun to move his way up the national recruiting boards, landing at No. 48 in the most recent Scout.com rankings.

One of the biggest reasons Reese has gained more national attention is in part thanks to Wiley. Wiley was invited to try out for the U16 National Team in Colorado, which traveled to Argentina and won the 2015 FIBA Americas U16 Championship, but did not go to the tryout due to an impending knee surgery. Reese was chosen as Wiley’s replacement, and while he did not make the final roster, was able to showcase his skills among the top talent in his age group.

These two rising stars, along with classmate Jamal Johnson of Spain Park highlight a special 2017 basketball class in the county.