The face behind the mask 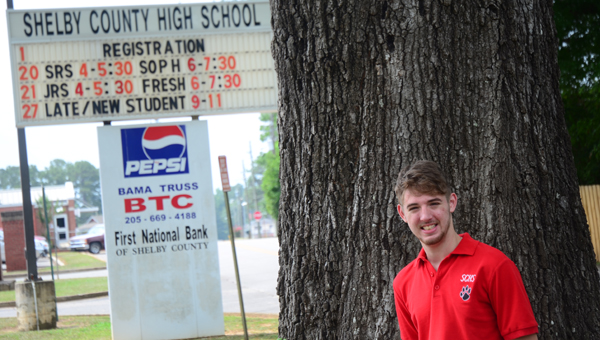 Noah Reece is a rising senior at Shelby County High School, and has been the face behind the Shelby County mascot throughout his high school career. (Reporter Photo / Baker Ellis)

COLUMBIANA –Mascots are, of course, supposed to be noticed. They are called on to be the conductors of organized crowd chaos, to be the focal point of crowd interaction with the game taking place. With their caricature-esque features and attention-garnering job descriptions, rarely do we think about the faces behind the masks. 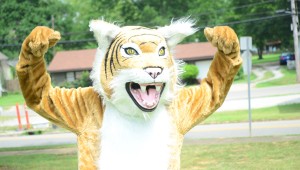 Noah Reece gets into character as Wiley, the Shelby County High School mascot, a role he has had all through high school. (Reporter Photo / Baker Ellis)

Noah Reece got into the mascot business in an ironically nondescript way. The rising Shelby County High School senior has donned the Wildcat mascot uniform, “Wiley,” since his seventh grade year, when the cheer sponsor at the time simply came into the lunchroom and asked who might be interested in becoming the mascot. Reece, who didn’t play football and played basketball in rec leagues, was actively looking for his niche.

“I had the free time, needed an extracurricular, so I just said, ‘let’s see what this is like’,” Reece said. “I did it, really loved it, and here we are. It’s just a repetition type thing. I did it once, love it, so kept doing it.”

While Reece may have fallen into his mascot suit and his Wiley persona by chance or happenstance, now, as a senior, it has become an integral part of his life. He naturally goes to all football games, home and away, as well as all home basketball games. He also makes appearances at local events, like the Shelby County Special Olympics and the JDRF Walk to Cure Diabetes, where he has been a huge hit.

An extremely accommodating and articulate kid, Reece understands the science, complexities and nuance that goes into a job most see as anything but complex. While most view the job of a mascot as just exaggerated movement, Reece understands it is much more.

“Every sport has a science,” Reece said. “Football, how you hit. Basketball, how you shoot. With mascots, it’s definitely how you act. When you get in a suit, you’re not you anymore, you are that character. You have to develop a character over time.”

From his performance at the most recent Alabama camp, he was named an All-American in the mascot division, one of only six from Alabama, and has the opportunity to go to Orlando, Fla. the week of New Years where he will perform in the pre-game festivities at the 2016 Citrus Bowl.

The cost of the trip is roughly $4,000, and the Reece family has set up a gofundme account to help cover the cost of the trip. To donate to help make Reece’s trip possible, you can visit Gofundme.com/schs-Wiley.