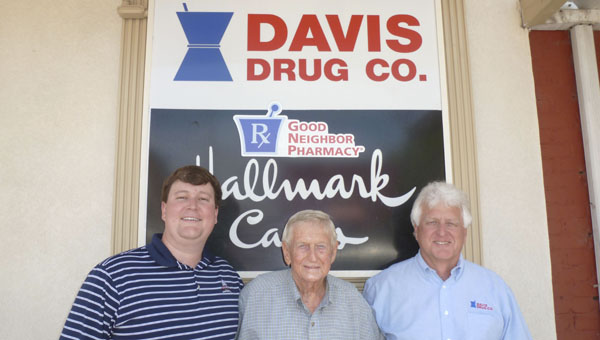 Columbiana’s Davis Drug has been owned by the Davis family for 59 years.

The family legacy is one of hard work devoted to customer service.

Patriarch Jimmy grew up in Sylacauga, the son of Julius Davis, a thrifty, gentle man with a dedicated work ethic.

From these strong roots Jimmy wanted to start his own drug store after graduating in pharmacy from Alabama Polytechnic Institute, now called Auburn University. He chose Columbiana and rented his storefront on July 1, 1956.

Dr. Harold Hall had opened the Columbiana Clinic and the two worked tirelessly together to serve the community.

“I opened on a song and a prayer with a loan from my father,” said Jimmy. “The drug store was open seven days a week for 47 years, the first three without a day off. I worked closely day or night with Dr. Hall for the Columbiana Clinic, which was the ER of the time, in my opinion.”

The Davis Drug soda fountain, which started in the 1930s and is known for its delicious milk shakes, is a beloved tradition which continues to date.

Jimmy added on to the drug store and bought the building and other property in town.

Son Jim entered the business after graduating from Auburn with a pharmacy degree and they bought the adjacent building.

“One of my main goals is to keep business in town,” said Jim. “We saw a need and opened the gift shop, which now includes bridal registry. Working with my father was scary for I was learning from a pro. It is my honor to work with him. I feel you should judge a man how he is a father to his kids. My father was the best.”

Grandson Treadwell entered the business after graduating from Auburn in business in 2010.

“I felt it was a calling for me to carry on the family tradition,” said Treadwell. “I am now a Certified Pharmacy Tech and can now help with the pharmacy end as well as the business end. I have learned so much from my grandfather and my father.”