Chelsea, Oak Mountain meet for 7-on-7 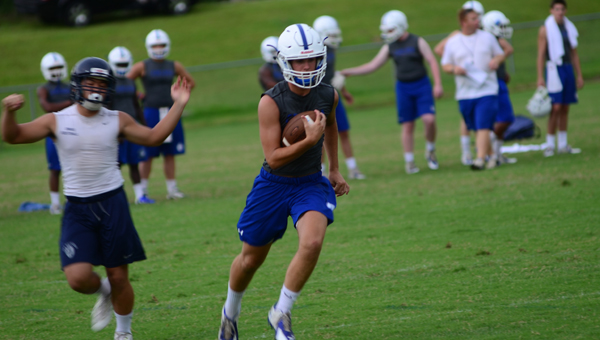 A Chelsea receiver gets past an Oak Mountain defender on June 25 at Chelsea High School. The two schools met at Chelsea to practice against each other and play 7-on-7. (Reporter Photo / Baker Ellis)

NORTH SHELBY – Oak Mountain High School traveled to Chelsea High School on June 25 to participate in an intra-squad practice and take part in some 7-on-7 games.

Now, it is June. The impact that these 7-on-7 games will have on the season that starts in late August is essentially nonexistent. However that doesn’t mean that coaches can’t use these games to get an early glimpse of how their rosters may shake out, or get a better idea of what they need to work on moving forward.

Over the course of roughly three hours on the afternoon of June 25, Chelsea and Oak Mountain ran through a number of basic practice drills and played four games of 7-on-7, two were played by the varsity and two by the younger kids. For Oak Mountain head coach Cris Bell, the practice gave him some things to think about moving forward.

“We aren’t a huge passing team,” Bell said. “So defensively, it gives our guys a chance to get out and play in space and get in coverage some more. What we learned defensively is that we have to do a better job of getting to our spots in zone coverage, and breaking to the ball better when it’s in the air. Offensively we have to work on our timing. Our quarterbacks have to clean up their footwork, that was the main thing I saw. Our receivers are running much better routes. We just need reps, that comes with time.”

Chelsea head coach Chris Elmore had the same general opinion on the 7-on-7 matchup. Namely, it’s good for both teams and allows everyone to get reps.

“What Coach Bell and I try to do when we get together is utilize all our kids together,” Elmore said. “We like that more than the 7-on-7 camps. That’s more of a competition type thing, you can’t play as many kids and can’t develop your roster as much. I like what we do.”

Elmore said he felt good about the practice as a whole, relaying it was just the third true day of football work for the Hornets, who spent the first three weeks of June strictly lifting and conditioning. Elmore said the biggest weakness he saw was a few busted coverages in the red zone, but felt good because his team hasn’t worked on that element of the game yet.

“If that was our biggest weakness I feel good about that,” Elmore said. “It makes you feel encouraged.”