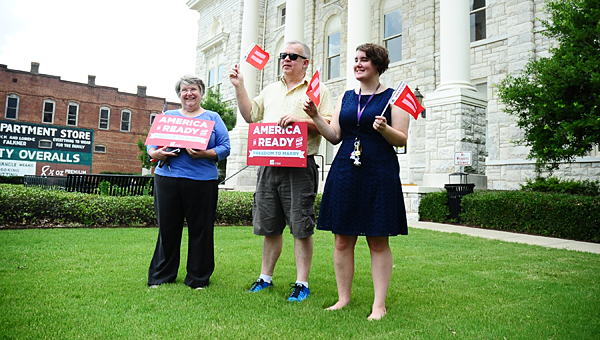 COLUMBIANA – The Shelby County probate judge will review a June 26 U.S. Supreme Court ruling ordering before deciding his policy on issuing same-sex marriage licenses in Shelby County, while the court decision is drawing mixed reaction from local and state officials.

Shelby County Probate Judge Jim Fuhrmeister’s office confirmed on June 26 it is not yet issuing same-sex marriage licenses, and will make a decision on the matter after Fuhrmeister reviews the full Supreme Court ruling.

In a June 26 statement, Alabama Attorney General Luther Strange said he “doesn’t agree with the opinion of the majority of the justices in their decision,” but said the U.S. Supreme Court has the “final say” in the matter.

“Today the United States Supreme Court overturned centuries of tradition and the will of the citizens of a majority of the States in declaring that Alabama and the rest of the nation must legally recognize same-sex marriage,” Strange wrote. “Chief Justice Roberts agreed with our amicus brief that ‘A state’s decision to maintain the meaning of marriage that has persisted in every culture throughout human history can hardly be called irrational.’

“But while the states are now required to recognize same-sex marriage, I expect the focus will now turn to the exercise of one’s religious liberty,” Strange wrote. “I will continue to defend the religious liberties of Alabamians and ensure that people and businesses honoring their religious beliefs are protected.”

Less than an hour after the Supreme Court decision was announced, a group of three locals representing the Montevallo Acceptance Project, Montevallo PFLAG, Birmingham PFLAG, the University of Montevallo Secular Alliance, Equality Alabama and the Human Rights Campaign began waving marriage equality flags and displaying signs reading “America ready for the freedom to marry” in front of the Shelby County Courthouse in Columbiana.

“A large part of our population is given a basic right that we have been denied for so long,” said David Haws, who was joined by University of Montevallo student Leslie Smith and Montevallo resident Sally Smith (no relation).

The trio rallying at the courthouse said they were planning to attend a celebration in honor of the Supreme Court ruling the same night at 6 p.m. at Eclipse Coffee in downtown Montevallo.

Haws, a part-time office administrator at a local Presbyterian church who said his church was “very pleased” he was rallying in favor of the ruling, said two of his friends have been a same-sex couple for decades, and said he was thankful they will have the same legal standing as opposite-sex couples.

“My friends have been together longer than I’ve been married, and that’s been 26 years,” Haws said. “Now they will have the same legal protections we’ve taken for granted.”

Sally Smith said two of her friends also are in a same-sex relationship, and plan to get married in Utah in July.

“Now, their marriage will be recognized nationwide, not just in Utah,” Sally Smith said.

Leslie Smith, who is the chairperson of the UM Secular Student Alliance, said she identifies herself as bisexual, and said the court ruling “takes a lot of stress” off her.

“If I do fall in love with a girl and I want to marry her, I can,” Leslie Smith said.