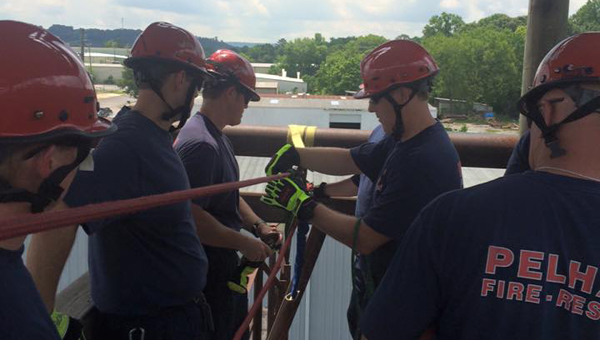 At least once a month, the Pelham Fire Department participates in rope rescue training to keep those technical skills sharp. (Contributed)

The crews trained on rope rescue scenarios using a lowering and raising system. Although it’s not a daily activity for the fire department, Battalion Chief over special operations Mike Reid said they run rope rescue drills at least once a month, if not more.

“It’s a special skill,” Reid said. “I always call it a perishable skill. Tying knots and knowing the systems is something that if you don’t have your hands in it once a month you forget it.”

With Oak Mountain State Park being in Pelham, Reid said the department needs to know how to respond to high angle situations and rescues at the bottom of the quarries. The park also makes for the perfect place to train with its 60 to 70-foot cliffs.

Although rope rescue scenarios are less that 10 percent of calls, Reid said it’s important to make sure the department is training frequently, especially when someone is hanging on the end of a rope. Medical calls happen so frequently that Reid said you never forget those skills, but the technical training required for rope work must be frequent.

“When it comes to putting our rescuers on the end of a rope we have to keep up with that because we don’t have the call volume,” Reid said. “Which is a good thing.”

In addition to training at Oak Mountain State Park, Pelham Fire Department also sets up in its drill field, utilizes systems off the ladder truck and they’ve even used the Pelham Civic Center and Ice Complex.

Reid said the last class at the civic complex, the team set up a high line system, which runs from one high point to another like a zip line. Crews were able to move from one side over the stands to the other.

“That was a lot of fun,” Reid said. “It was pretty cool to go over the rink like that.”

Rope rescue training is part of three special operations the department participates in monthly. They also train in diving and in hazardous materials response, while having daily fire and EMS training.

Magician Russell Davis wows Seth Hamilton with one of his magic tricks at the Helena Summer Reading Program held at... read more