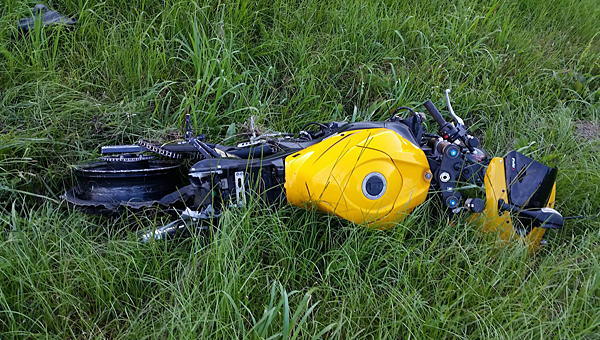 A motorcycle driver fleeing from police on Interstate 65 wrecked near the Chilton-Shelby county line and then ran into a wooded area. (Contributed)

CLANTON – A suspect eluded police Sunday after leading them on a high-speed chase on Interstate 65.
Alabama Law Enforcement Agency officers attempted to stop three motorcycles on I-65 Southbound, and Clanton Police Department was contacted at about 6:20 p.m. as the chase was going through Clanton city limits, according to a press release.
ALEA advised that one of the motorcycles was stopped near the 207-mile marker after a mechanical failure.
CPD units responded to the area of Exit 205, where officers saw two motorcycles, matching the descriptions provided by Chilton County 911, exiting onto U.S. Hwy. 31.
CPD conducted a traffic stop on one of the two motorcycles at Exit 205, and the suspect was detained for an ALEA representative but the second motorcycle did not yield to law enforcement.
Instead, the driver turned south on 31 and immediately back onto I-65 Northbound.
The violator continued north on I-65 at speeds exceeding 140 mph until losing control of the motorcycle approaching the Chilton-Shelby county line.
The suspect fled the scene of the wreck, crossing the southbound lanes of the interstate and fleeing into a wooded area.
Witnesses at the scene reported seeing a white male flee into the woods, according to the release.
Officers discovered the suspect’s helmet and a sub-compact firearm at the site of the crash.
Law enforcement officers from Calera Police Department, Shelby County Sheriff’s Office, Chilton County Sheriff’s Office and ALEA canvassed the area looking for the suspect for about an hour before canceling the search.
‚ÄúThe Clanton Police Department would like to thank all of the area law enforcement agencies that assisted in the incident on I-65 this evening,” CPD Capt. Neil Fetner said Sunday.
Anyone with information about this incident should contact the Chilton County 911 Call Center at (205) 755-1120.
Fetner said ALEA handled the two suspects who were caught.
“We were just there in a supporting role,” he said.