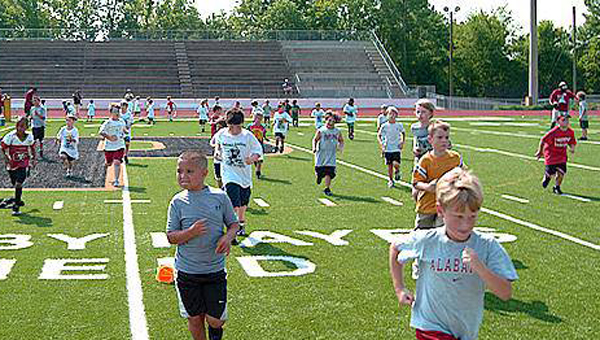 PELHAM— In order to have a successful football program, Coach Tom Causey knows he has to start instilling the proper techniques at a young age. It’s part of the reason he said the annual youth football camp is so important.

“For us to build a football program here, I think it starts at this age group,” Causey said. “We’re trying to be as involved as we can be. We are working with the youth league coaches here. I am absolutely looking forward to it.”

Pelham High School Football coaches will be training the youth football camp in skills such as individual positions and team concepts. The younger age group will learn the proper stance, alignment and heads-up tackling, along with the proper safety techniques to prevent injuries.

Causey said the older kids will get a little more position specific and technical training at the camp with more drill work to make them better as players. They will be middle school aged kids, so Causey said he is looking forward to meeting some potential future players.

Two NFL football players with the Cincinnati Bengals, Michael Johnson and Nico Johnson, might also make an appearance at the camp if their schedule allows. Causey coached both players when they were in high school before Michael played for Georgia Tech and Nico played for Alabama.

“If they can make it back, they’re coming,” Causey said.

In addition to training young football players, the program also helps raise money for the program. Causey said every dime helps and it all goes back to the program, including the youth leagues.

The team recently participated in a mattress sale to benefit the football team on June 20. They sold 27 mattresses, making about $3,000.

“The community has been very supportive since we have been here,” Causey said. “It’s been really good.”

The youth camp cost $60 for early registration and $85 the day of the camp. Checks should be made out to Pelham football.