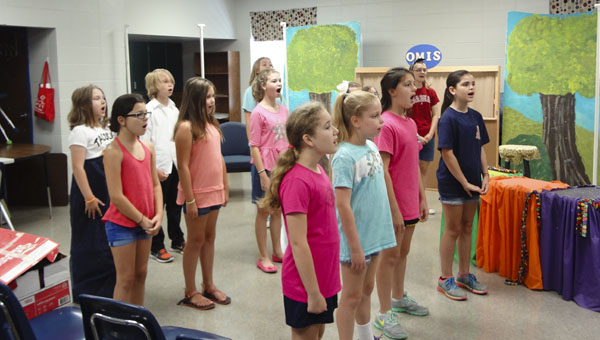 Students warm up their voices for a rehearsal of “Return of the Glass Slipper” at a Shelby County Schools musical theatre enrichment camp at Oak Mountain Intermediate School on June 25. (Reporter Photo/Emily Sparacino)

The new academic year hasn’t started yet, but several Shelby County schools have hosted dozens of students this summer for enrichment camps.

“We teach all the aspects of musical theatre,” Richardson said, noting singing and acting as two chief aspects. “We teach by a process that we have constructed of mind, body and voice … to make those connections.”

Thirteen children of varying ages and stage experience collaborated throughout the week to rehearse a production called “Return of the Glass Slipper” to perform for their families at the school on June 26.

“We kind of tailor-make our program for our kids … whatever fits for the group,” Richardson said. “We are flexible if nothing else. We want to make sure that the kids have a good foundation of musical theatre elements and that they leave comfortable.”

“It teaches you how to break out of your shell (and) get to know other people,” Brignet said, and added the camp also taught students how to “project your voice so you’re not mumbling” and about “projection, expression and diction.”

“It’s a great opportunity to get out of your comfort zone and find something new,” Audrey Richardson, a sixth grader at Oak Mountain Middle School, added.

Hope Miller, another fifth grader at OMIS, said she and other campers learned about the stage, directing and costuming.

“It’s preparation, too, for something beyond school, if it’s something they so wish to do,” Ashley Richardson said.

Leaning on extensive theatre backgrounds, Richardson and Jolly were adamant about the students enjoying the camp, whether they were beginners or seasoned stage participants.

“This has been a part of me since I was 7,” Richardson said. “It’s sharing our passion, sharing our joy with the kids.”

“I think that they treat you like the directors would treat you if you were real actors,” OMIS fourth grader Katie Farquhar said of Richardson and Jolly. “They’re just great teachers.”

Thompson seventh grader Claire Barnett said the camp taught students to work for major and minor roles without assuming they would land a lead part.

“It teaches you that you can’t always get the biggest part or the part that you want,” Barnett said. “You have to work for it.”

Meanwhile, at FOES, 13 students in first through sixth grades were expressing their creativity in art projects under the supervision of FOES art teacher Mari Newton on June 25.

“I just try to make it more relaxed,” Newton said. “They know they have to get all of the projects finished, but they can work at their own pace.”

Newton said most of the students participated in last year’s art camp, too.

“I like everything,” Griffin Ellis added about the projects.

The camps are open to all students who are zoned for Shelby County Schools.