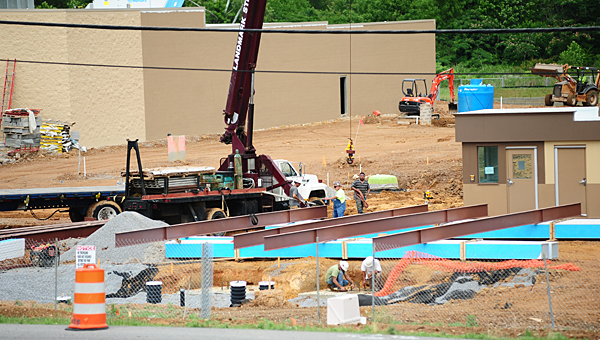 Construction crews work to build the new Walmart Neighborhood Market off Alabama 119 in Alabaster in late May. The majority of the structure is now completed. (File)

ALABASTER – The under-construction Walmart Neighborhood Market in Alabaster is looking to hire 95 employees to man the new store, and has set up a temporary hiring center in Alabaster’s Southbrook Village Shopping Center.

The company has set up the hiring center at 450 First St. S.W., which is near the Chubb’s Grub Station restaurant. The center will be open Mondays-Fridays from 8 a.m.-5 p.m.

Those interested in working at the Neighborhood Market can apply in person at the hiring center, or online at Careers.walmart.com.

“We are looking to build a team of hardworking individuals who are excited to explore the professional growth opportunities offered by Walmart,” Alabaster Neighborhood Market store Manager Jonathan Webb wrote in a statement.

Most new employees hired this month will start working in August to help prepare the store for its grand opening.

Construction crews are on schedule to complete the new Walmart Neighborhood Market, which is off Alabama 119 across from Publix in Alabaster, by fall of this year.