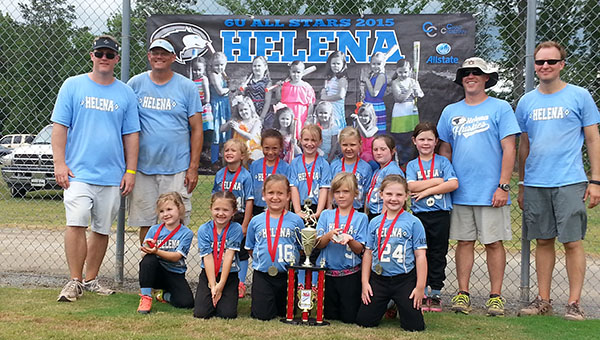 Pictured are coaches and players of the Helena 6U Softball All-Star team who recently finished as runner-ups in the NSA State Softball Tournament. (Contributed)

HELENA–The Helena 6U Softball All-Star team recently competed in the NSA State Softball Tournament in Boaz and finished as the tournament runner-up.

Helena began the tournament with a match-up against Millbrook where they lost a close game 25-24.

The Huskies were bumped down to the loser’s bracket the next day, where they fought back and won three games in row before losing to Millbrook again in the championship game.

The tournament consisted of four teams that included Helena, Millbrook, Holtville and Wetumpka.

Helena’s team consisted of players who were chosen by coaches from the spring league to play this summer and represent the all-star team.

Helena 6U head coach JJ Stanbridge stated that one of his favorite things about coaching little league kids is just to see their improvement and watching them get better.

“In just the three weeks we played together they improved so much,” said Stanbridge. “We finished runner-up at this state tournament and they have just gotten better and better. That’s the exciting part of coaching.”

Another big component is teaching the fundamentals and Stanbridge stressed that that was a big part of coaching little league.

“We teach them things such as how to throw to first base and how to play their positions,” said Stanbridge. “We were one of the only teams to have someone playing the catcher position.”