Hollywood in Alabaster: ‘Faith of our Fathers’ premieres at Amstar 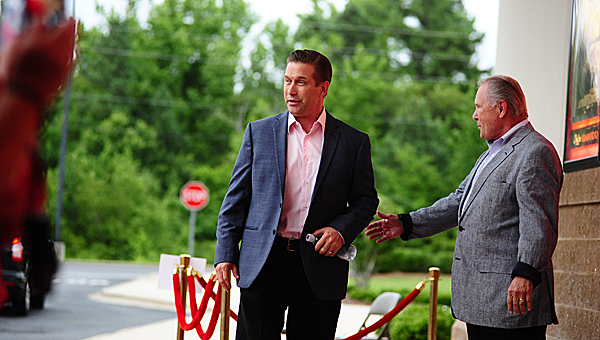 Stephen Baldwin, center, walks down the red carpet during the premiere of “Faith of our Fathers” at Alabaster’s Amstar Cinema on June 30, as former state Sen. Hank Erwin, right, looks on. (Reporter Photo/Neal Wagner)

ALABASTER – Retired U.S Army Staff Sgt. Greg Akers shared the red carpet with a trio of internationally known movie stars on June 30, but something else brought him even more excitement during the world premiere of “Faith of our Fathers” at Alabaster’s Amstar Cinema.

“I still get chills when I get that kind of reception,” Akers, the American Legion Department of Alabama adjutant, said after hundreds of local residents cheered him and his fellow veterans as they walked a red carpet into the theater. “If you’ve been overseas, when you come back to that kind of welcome, it washes it all away.”

Akers and about 50 of his fellow veterans – many of who came from the Pelham-based American Legion Matthew Blount Post 555 – kicked off the movie premiere event, and were among the first in the world to see the faith-centered movie based on the Vietnam War.

Shortly after the veterans received a heroes’ welcome, the stars of the movie, Stephen Baldwin and Kevin Downes, along with movie producer Bobby Downes, arrived from the Shelby County Airport to greet fans and sign autographs in the theater’s lobby. 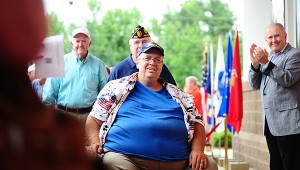 Local veterans receive the red-carpet treatment during the June 30 premiere of “Faith of our Fathers” at Alabaster’s Amstar Cinema. (Reporter Photo/Neal Wagner)

Alabaster was one of five locations across the nation to premiere the movie on June 30, along with Fresno, Calif., Sioux Falls, N.D., Simi Valley, Calif., and Dallas.

According to the movie’s synopsis, “Faith of our Fathers” follows the story of two young fathers, “A man of great faith and a cynic,” who report for duty in the Vietnam War in 1969.

“A quarter-century later, their sons, Wayne and John Paul, meet as strangers. Guided by letters their fathers wrote from the battlefield, the sons embark on an unforgettable journey to The Wall – the Vietnam Veterans Memorial in Washington, D.C.,” read the synopsis. “On the way, they discover that devastation of war cannot break the love of a father for his son.”

Baldwin said he was happy to be a part of the movie, and thanked the veterans in attendance for their service to the country.

“For me, God really intervened in all this,” Baldwin said. “As much as we just wanted to make a great father-son movie, relevant to Vietnam, we never could have anticipated that so many people like the folks here would rally around it to use it as an opportunity to bless and honor veterans.”

“Birmingham is a big veterans community, and we wanted to come here,” Kevin Downes said. “Obviously, Hank Erwin is a friend, and he said ‘You’ve got to come here and do this,’ and so I said ‘Let’s do it, let’s make it happen.’

“Faith of our Fathers builds up veterans and honors veterans, and is a beautiful father-son story seven years in the making,” Kevin Downes added. “We’re excited to share it with the world.”

The premiere drew hundreds of residents from throughout central Alabama – most of who were lined up to greet the veterans and movie stars more than an hour before the film’s first showing.

Among the first in line to see the movie was a group of 22 members of Columbiana’s Antioch Baptist Church.

“He said he was doing the premiere here in Alabaster, and I said ‘That’s right in my backyard,’” Amy Rush said. “It’s so important, especially in the times we live in, to have faith-based movies to share the gospel.”

Helena 6U Softball All-Star team finishes as runner-ups in…