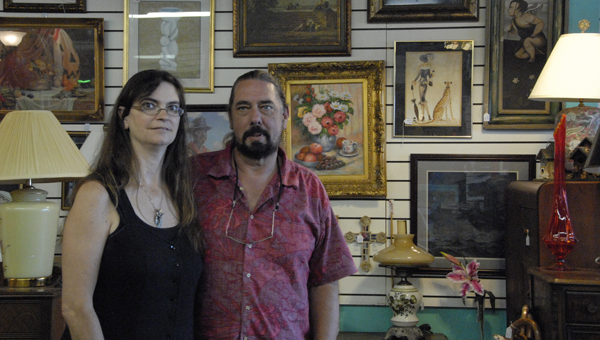 PELHAM—Brent McClure found himself at another estate sale looking for treasure within the scattered items around the house.

Nothing particularly stood out among the mundane household items, until a little glass, igloo-shaped thing caught his eye. He didn’t have a clue as to what it was and neither did the people holding the sale, so he bought it.

After a little digging, he found out the little igloo was actually an ink well from the 1860s. This diamond in the rough only continues to prove to McClure that he never knows what he’ll find next.

“When you find stuff like that, sometimes it’s a learning experience for us,” McClure said.  “I enjoy finding stuff — things that you just don’t normally think about finding or seeing. When you are out looking and picking, you just never have a clue what you are going to find.”

McClure and his wife, Tracy, own McClure Trading Company, an antiques and collectibles resale store located at 2781 Pelham Parkway. They’ve had the business for about three years, but recently moved to Pelham from Crestwood and opened the new location June 20.

Tracy McClure said often times they don’t even know what they are going to get, because they buy out estate sales. They’ll go in and box everything up, and, as they unpack, they’ll sort all the items into three piles: keep, donate and trash.

“It’s really not anything particular that we look for, it’s just whatever we think we can sell, things that are unique or unusual,” Brent McClure said.

Albums and furniture are some of the biggest sellers the McClures said they’ve noticed. Brent McClure said vinyl is really popular in the younger generation right now, so he makes sure to purchase Rock n’ Roll, along with some Blues, Jazz and Country from the 60s and 70s.

The people that come into the store, though, are the McClures’ favorite part about what they do.

“We made several lifelong friends there,” Brent McClure said. “There were several couples that became friends more than customers. They’ll come in and sit down and talk to us.”

It’s one of the things that sets McClure Trading Company apart from other shops like it in the area, according to Tracy McClure.  In addition to being greeted immediately when customers walk through the door, Tracy McClure said they take an interest in their customers and ask what they are looking for.

“That’s where we strike up conversations with customers so they become more than just customers,” Tracy McClure said. “We show an interest in the people that come in our door. If you’ve got a story that your grandmother had a lamp just like that, I want to hear about it.”

Brent McClure said one of his short-term goals is to create a Pelham Antique Trail brochure listing all of the resale stores in Pelham and Alabaster with a map to them. He said that way people know they can hit five or six places all within the area.

“I don’t look at those places as competition because what I have, they are probably not going to have,” Brent McClure said. “If I have a customer that comes in looking for something that I don’t have and I know it’s in another place, I let them know.”

The McClures said they are looking forward to the word getting out about their move. They believe they will do really well in their new location, and have noticed business picking up a little every day.

On the Hill: Pelham woman completes internship with Senator…