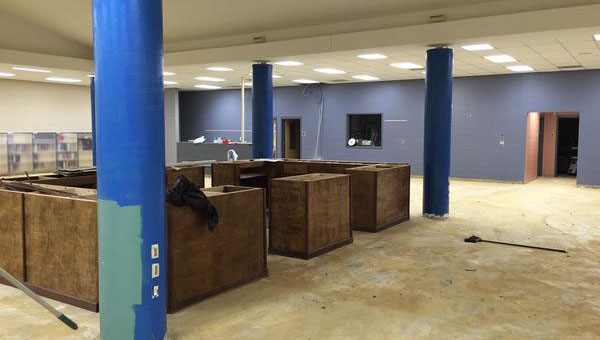 A new circulation desk made by students at the Shelby County College and Career Center was installed in the Chelsea High School learning commons this week as part of a remodeling project. (Contributed)

CHELSEA – When more than 1,200 students enter Chelsea High School this fall for the new school year, they will find upgrades in the library and auditorium.

“We hope to be done within the next two weeks––definitely by the start of school,” Trucks said. “That’s going to be awesome. (We are) very excited about that.”

More upgrades, including new furniture, workstations and an updated collection are planned for the learning commons over the next few years to make it more “reader friendly,” according to Trucks.

“We’re going to update the collection and hopefully the overall atmosphere in the learning commons,” Trucks said. “It will be a three-to-four-year process. The physical, or cosmetic, makeover is this summer, and we’re going to hopefully change the look of it as far as new furniture, new workstations and a new collection.”

Trucks said the City of Chelsea and the Shelby County School System are helping CHHS with funding for the project, which is estimated to cost more than $100,000 when completed.

On the cusp of the remodeling project, the learning commons received its new name this spring as a tribute to CHHS math teacher Frank Ritchie’s late parents, who had a significant impact on the school and community.

Col. John Ritchie taught math for many years in Chelsea, overlapping with his son for six years at CHHS before he retired.

“When I started teaching, we were the high school math department,” Frank Ritchie said in an interview following the dedication of the library in April. “Dad always said teaching was the best job he ever had. I wish I was just half as good as he was.”

Work on the library and auditorium started about two weeks ago, after the students were dismissed for the summer.

The auditorium will feature new carpet and more nameplates on the backs of the seats.

“We are adding to our Legacy Seat Campaign,” Trucks said. “Folks are naming the seats in the auditorium … in honor or memory of a family member or loved one.”

Nameplates are $150 each. The CHHS class of 2014 reserved one for a retiring teacher, and the class of 2015 dedicated another to Nick Hill, a classmate who passed away when the students were sophomores, Trucks said.

“We’ve raised over $3,000 for that project so far,” Trucks said, adding that the auditorium upgrades will total about $75,000. “We would like to make improvements to the sound system and lighting system.”

As with the learning commons, the city and county school system are contributing to the auditorium project.

“Both facilities we use for everybody in the building,” Trucks said. “It’s going to be really neat to have those updates. Those haven’t been changed since the building opened in 1993. We will get more out of each than we do now.”

An open house for CHHS alumni is planned for Aug. 6 at 6 p.m. at the school, Trucks said.

Former graduates will be able to tour the school and see how the library, auditorium and other parts of the building have changed over the years.

“As the school continues to grow, it’s a challenge to make every space student friendly,” Trucks said.

About 40 kids from third through eighth grade gathered at Oak Mountain High School on June 29-30 for a basketball... read more