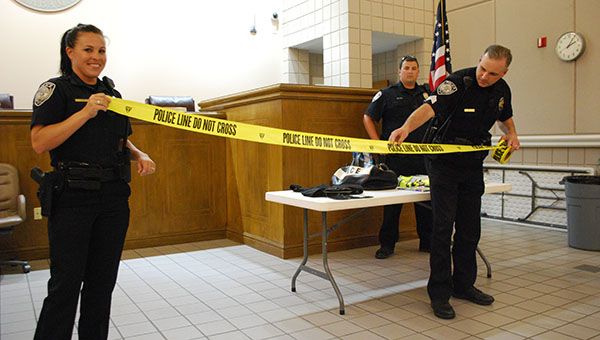 HELENA–A crowd of kids and their families gathered at Helena City Hall on Wednesday, July 1, as four members of the Helena Police Department came to share safety tips and knowledge about what its like being an officer.

Some of the things discussed were safety equipment such as the highlighter yellow vest officers wear while directing traffic, why it is importance to stay behind and outside the boundary whenever police caution tape is seen and more.

Officers also showed the kids the different equipment and tools worn on their belts everyday.

Richards asked the audience ‘anybody know what this is?’ Referring to a police baton and a girl responded by saying a “stellascope” which prompted some laughs.

Richards also showed the kids his protective vest and called dispatch to show how other officers communicate with each other quickly.

The biggest hit of the program came when Richards brought in his 9-year-old Police K-9 partner Buck to demonstrate how he uses his powerful nose to pick up on scents.

Buck is a German Sheppard and has been with the Helena Police Department for seven years now.

Richards discussed how different signals were used and if Buck performs well he is rewarded with his toy and many kids got their picture made with the dog afterwards.

The program ended with Richards and the other officers showing off one of the Helena Police Tahoe’s. Kids got to sit in the front seat and see what it’s like to ride in a police cruiser.

For more information on the Jane B. Holmes Public Library and the Summer Reading Program visit Cityofhelena.org/Default.asp?ID=168&pg=Public+Library