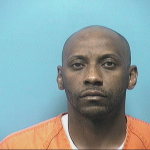 He was apprehended at the Value Place hotel in Pelham, and was allegedly found with marijuana and two 10 ml hydrocodone in his possession.

He was charged with second-degree human trafficking, which is a Class B felony and is defined as knowingly benefitting financially from participating in a venture of arrangement for the purpose of sexual or labor servitude.

The charge came after Crutcher allegedly solicited a female victim to a Task Force Member for prostitution.

Crutcher is currently being held in the Shelby County Jail with a bond set at $50,000.

Alabama law states that a Class C felony is punishable by a prison sentence of a minimum of one year in prison and a maximum sentence of 10 years. A Class B felony could result in a jail sentence of two to 20 years.