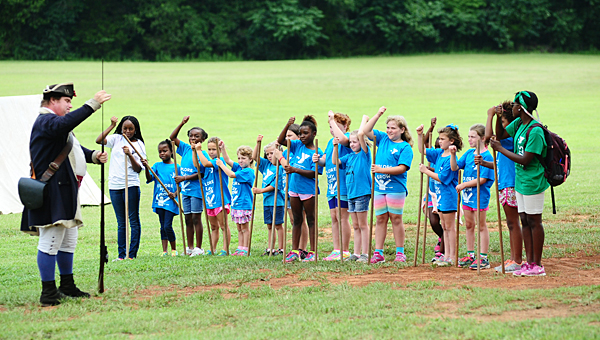 MONTEVALLO – After learning how to march in formation, handle a musket and let out a ferocious battle cry, Alabaster YMCA day camp member Lillianna Rider said she was ready to make a difference in Gen. George Washington’s continental army.

“It would be great. I could save the world,” Rider said after training alongside her fellow camp members under Chris Long at Montevallo’s American Village. “I want to save people and help people.”

For Rider’s friend, Layla Davis, holding a broom handle simulating a musket and learning how soldiers fought in the late 1700s was the highlight of her morning.

“It was great,” Davis said with a smile.

Thirty-six day camp members from the Alabaster YMCA gathered at American Village on the morning of July 1 as they prepared for Independence Day by taking a look back in time.

The Alabaster group made up a portion of the more than 1,100 students from the Alabaster, Greystone, Hoover, Shades Valley and Trussville YMCAs who visited American Village during the week leading up to the holiday.

During the visits, the campers learned how to become spies for General Washington, played colonial games, met historical figures such as Thomas Jefferson and Patrick Henry and learned about the American court system used in the 18th century.

The Alabaster students quickly accepted their challenge to fight the British army while drilling under Long.

“Do you want some king in England telling you what you can and can’t do?” Long asked the students, resulting in screams of “No!”

“Well then, if you want to be free, you’ve got to fight for it,” Long said.

Alabaster YMCA camp counselor Justice Gray said she was impressed by how attentive the campers were during the colonial activities.

“It’s hard for anyone to hold their attention that long,” Gray said of the first- and second-grade students. “They are really interested in this.”

“We know children learn by experiencing. It’s all about fostering better American citizens,” Poole said. “One day, these children will be our leaders. We hope to lay good foundational knowledge on what it takes to be an American.”