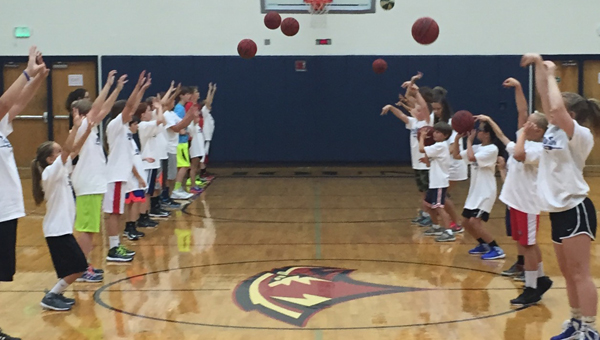 About 40 kids from third through eighth grade gathered at Oak Mountain High School on June 29-30 for a basketball camp put on by head girls coach Allen McGowan. (Contributed)

NORTH SHELBY – Allen McGowan has only been the head high school girls basketball coach at Oak Mountain for one season, but is already making an effort to get the community involved with the program. From June 29-30, McGowan and members of the Oak Mountain girls basketball team hosted roughly 40 children ranging in age from the third to the eighth grade for a two-day basketball camp.

McGowan, who has taught at Oak Mountain Elementary School for 22 years, has long been involved with the boys and girls middle school basketball teams as well as the rec teams and competitive All-Star teams in the winters.

“This was the first time we’ve done this,” McGowan said. “We did a lot of drills, but also had a lot of games and competitions. We fed them lunch both days and had some of the high school players there. We had a great time with it.”

The goal of the camp, McGowan said, was to give the kids involved in the Oak Mountain school system an opportunity to get out and engage with the program in the summertime, and to continue to get kids interested in basketball and Oak Mountain basketball.

The girls team held a one-day camp over winter break during the season this past winter, and McGowan hopes to continue this summer camp in the future.

Oak Mountain finished the 2014-15 season with an 11-13 record and lost to Hoover in the opening round of the 7A Area 5 tournament.