On the Hill: Pelham woman completes internship with Senator Shelby 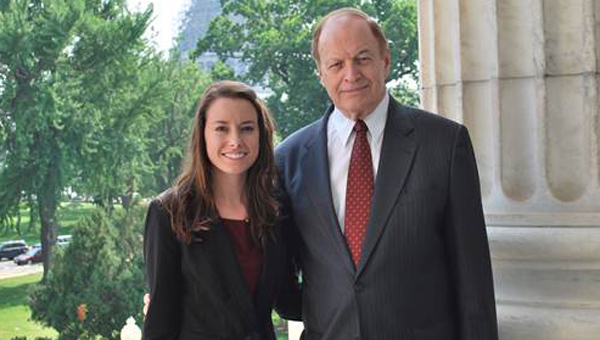 PELHAM— One Pelham native received an inside look at how congress functions through an internship in Washington, D.C. working with U.S. Senator Richard Shelby. Bethany Carter completed her internship as of June 29 and was hired on as a staff assistant for the office.

“Nothing beats being on the Hill in person,” Carter said.  “If you are at all interested in seeing how the government works, although it was difficult getting here, the experience was definitely worth it.”

After graduating from the University of Alabama in May with a degree in political science, 22-year-old Carter applied for the internship on Senator Shelby’s website. She said she initially planned on looking for jobs while interning.

As an intern, Carter led Capitol tours for constituents, attended Congressional hearings and conducted research for full-time staff. She said she was surprised by how much face-time she got with the Senator and how much first-hand experience she gained versus just answering phones.

What also surprised her, she said, was how interesting and educational the entire experience was. She thought many issues would be over her head, but seeing Senators engaging with experts taught her about issues she wasn’t as familiar with such as energy, homeland security and Native American affairs.

Carter plans to gain as much experience from working on the Hill in the Senator’s office as she can before going to either graduate or law school. Ultimately, she said she is interested in pursuing public policy, hopefully in Washington, D.C.

She said she definitely recommends applying for this internship to not only political science students, but also anyone with an interest in working with the government. It helps to see how every job sector interacts and overlaps with the government

“Understanding our government is important for any job sector, and having an internship on the Hill is a very valuable and impressive experience for a future career,” Carter said.

Senator Shelby’s Congressional Internship Program is open to college students who exhibit an interest in government and public service, and there is also a program for high school students. The Page Program allows high school students to spend a few months living in Washington, D.C. working as a page for a Senator or member of the House.

Carter grew up living near Pelham High School and graduated from Evangel Christian School in Alabaster. While in college, Bethany conducted undergraduate research, participated in Model United Nations conferences in D.C. and Chicago, and served in a variety of nonprofit organizations as a volunteer grant writer, communications director and administrative aide.