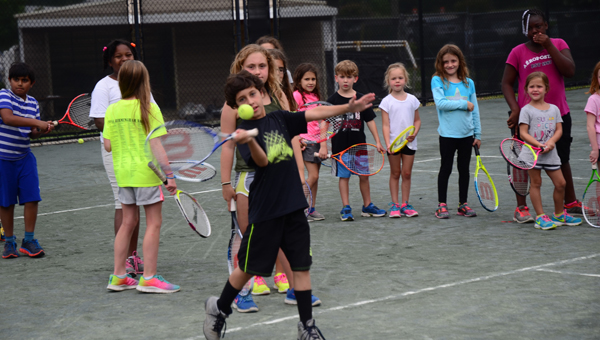 The Greystone branch of the YMCA held a tennis camp from during the week of July 1. The campers ran through a number of drills and played varying kinds of tennis games as well. (Reporter Photo / Baker Ellis)

NORTH SHELBY – The week of July 1 marked the second of three weeklong tennis day camps at the Greystone branch of the Birmingham YMCA for this summer. The Greystone Y has been putting these camps on for a number of years and has had a consistently strong number of kids come out for the tennis weeks. The second session had a turnout of roughly 22 kids every day.

Greystone is in the midst of its summer season, easily the busiest and most profitable time of year for the Y. Throughout the summer, Greystone holds weekly summer camps, with certain camps being offered certain weeks, like the tennis camp.

The point of the tennis camp, according to camp instructor Rennie Benoit, who runs the camp along with Cash Mashego, is to develop the campers’ skillset to the point where, at the end of the summer, they could compete in a junior league if they had the desire.

“About 90 percent of them have never picked up a racquet when they come out,” Benoit said in a July 2 phone interview. “By the third week, they should be ready to go play in a junior league.”

“We want the kids to stay to stay in the sport after the camp is over,” said Gabriell Davis, summer camp director at the Greystone Y.

The third camp session will run the last week of the summer season, the week of July 27. While a number of campers come to all three weeks, if you would like information on how to sign up for the third week, either visit the Greystone branch or visit their website at Ymcabham.org/greystone.