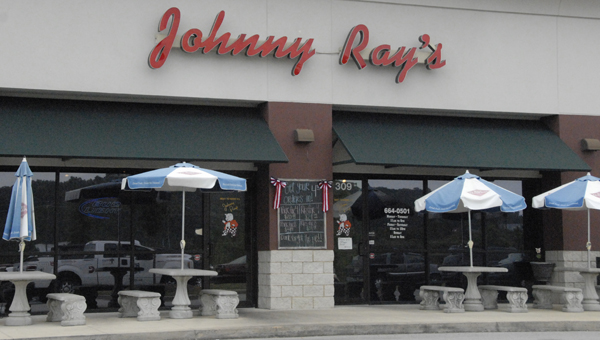 Johnny Ray’s BBQ was one of 29 restaurants inducted into the Alabama Barbecue Hall of Fame in June. (Reporter Photo / Jessa Pease)

“The State of Alabama has become a destination for barbecue lovers across the country,” Bentley said in a June 23 press release. “The hall of fame provides a way for us to celebrate the great restaurants that have made Alabama a tourist attraction.”

There are four Johnny Ray’s locations in Alabama in Chelsea, the Colonnade, Oak Mountain and Pelham. The first Johnny Ray’s was opened in 1953 in the Roebuck Shopping Center.

Owner of the Pelham location, Julian Swinford, has been with the company since he was 21, and he just purchased his franchise three years ago. He said he loves Johnny Ray’s for three reasons: its food, its history and how long it’s been around.

“It’s a great feeling,” Swinford said of being inducted into the hall of fame. “I wasn’t really expecting it and didn’t really know it existed.”

The plaque is hanging up inside the Pelham restaurant now, right in front of the pickup window.

Johnny Ray’s isn’t a stranger to winning awards though. Its chocolate pie won the Magic City Chocolate Challenge in 2013. It was the first year for the event.

Swinford said Johnny Ray’s is known for its lemon, banana, chocolate and coconut pies. He also said the pork, chicken, ribs and hamburgers are his favorite things on the menu.

The hall of fame was developed by the Alabama Department of Tourism as part of its “Year of Alabama Barbecue” promotion, highlighting the state’s barbecue heritage. Restaurants received their personalized plaques June 29.

“A recent survey revealed that barbecue restaurants make up the highest percentage of restaurants in Alabama which rivals any other state,” Lee Sentell, state tourism director, said in a June 23 press release. “Travelers are looking for an authentic barbecue experience and we want to help drive business to these great local establishments.”