Kyla Kugler, a Chelsea High School graduate, is one of 28 students to be recognized for receiving a Jimmy Rane Foundation scholarship this year during the Jimmy Rane Charity Golf Tournament on May 14. 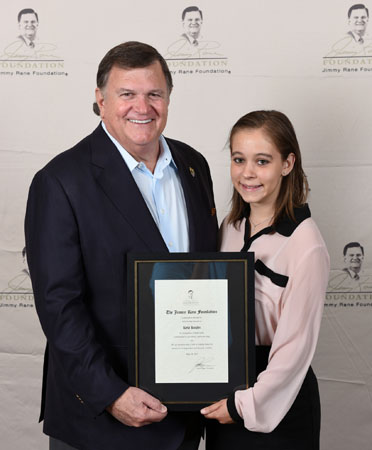 Presenting Kyla Kugler, right, with a Jimmy Rane Foundation scholarship award is the organization’s founder, Jimmy Rane. Kugler accepted the award during the Foundation’s annual charity golf tournament in Montgomery on May 14. (Contributed)

Kugler was waiting for her last high school theatre performance of the musical “Oklahoma” to begin when the she learned she was selected as a Jimmy Rane Foundation scholarship recipient, according to a press release.

While the initial surprise of receiving the Foundation scholarship was exciting, Kugler was most eager to share the news with her family and friends.

From backstage, Kugler emailed her mom in the waiting audience to tell her that she had received a scholarship.
When the show was over, Kugler’s mom congratulated her daughter. Kugler said her parents were just as thrilled as she had been.

“I felt honored that other people wanted to recognize me for what I have achieved at school and in my community,” Kugler wrote in the release about receiving the award. “Knowing that there will be financial help for my college education is such a relief and I am very grateful.”

A Columbiana resident and 2015 graduate of CHHS, Kugler excelled in school with a 4.0 GPA and participated in a number of leadership roles, including president of First Priority, vice president of the Thespian Honor Society, and as member of National Honor Society and Key Club.

She has also volunteered in her community with Relay for Life to benefit the American Cancer Society and as a partner with Special Olympics.

Given that Kugler’s older sister just finished her undergraduate degree and her older brother is currently in college, the Jimmy Rane Foundation scholarship will be a big help to Kugler and her parents as she begins to pursue her college education this fall at Samford University.

“Scholarship money is a very important factor in making this college education at Samford University affordable for us,” Kugler wrote. “My parents and I fully believe that is the right college for me, and that God has plans for me to be there.”

Kyla plans to pursue a bachelor’s degree in mathematics while at Samford.

She plans to go on to obtain a master’s degree in education to be able to teach mathematics on the secondary level.

“I wish to be the kind of teacher that supports my students as they face battles at home, typical high school drama and important life decisions,” she wrote. “No matter what I am led to do 10 years from now, whether or not any of the plans that I have come true, I desire to glorify God wherever He puts me.”

“I am grateful not just for the financial award, but also for the honor of recognizing my accomplishments,” she wrote. “Thank you to everyone who invested time, effort and money to make this scholarship possible.”

Kugler encourages other students to keep their heads up when applying for scholarships because eventually it could pay off.

“The support you receive can make a huge impact in how your get through college, no matter how tedious the process leading up to it was,” she wrote.

The Jimmy Rane Foundation has awarded 282 college scholarships to students since its establishment in 2000.
Jimmy Rane, founder of Abbeville-based Great Southern Wood Preserving Inc., hosts the Foundation’s annual golf tournament each May as the single fundraising event for the Foundation, which draws both corporate and individual sponsors.