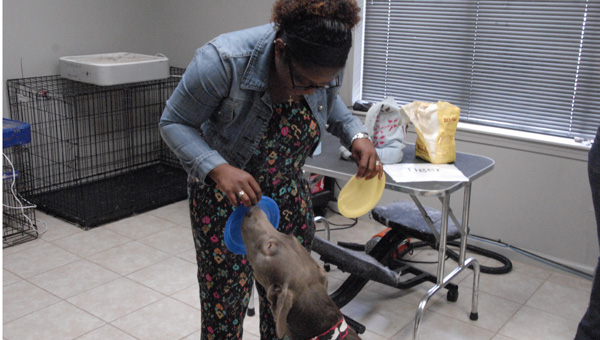 Roverchase trainer Rilinda Taylor asks Skye to pick out which one of the plates is blue. (Reporter Photo / Jessa Pease)

PELHAM— Dogs at Pelham’s Roverchase differentiate colors. Not only that, but they’ll also fetch a plastic tiger when prompted with the word “Tiger” on a flashcard.

These might sound like extraordinary feats that only the most Einstein of pooches can accomplish, but any dog can learn these tricks, according to Roverchase owner and trainer Abigail Witthauer. It all has to do with the way Roverchase is training dogs.

“They can do some very amazing things,” Witthauer said. “We are able to have all of the dogs in our program do some pretty significant matching. We can teach them the names of infinite objects, ask them for that object and they can get it.”

Roverchase uses a method called Bond-Based Choice Teaching that focuses on bonding and relationships before traditional training. Jennifer Arnold, who runs Canine Assistants in Atlanta, developed the method. Witthauer calls Canine Assistants the largest and most successful service dog organization in the country.

The national average for service dogs to graduate from an organization is 37 percent, but Canine Assistants graduates about 98 percent of its dogs. Because of this, Witthauer started spending more time with Arnold and attended a presentation on the method in March 2014.

The next month they started their first service dog in the bond based teaching, deciding not to train her to do anything. Everything was done through social cues and mimicking.

They taught her how to retrieve through matching behaviors as well. Witthauer would throw something and then go and pick it up herself. Eventually, she simply asked the dog if she could do the same thing. Rather than commanding the dog, Witthauer said the method calls for casual conversation.

She said that all the studies in the past three to five years pushed Roverchase in this direction. Dogs are about on the level of a preverbal child 12-18 months with their bonding and their learning capabilities. Witthauer said if a preverbal child wanted to be picked up, the first thing an adult would do is pick it up.

Despite all the science on her side, Witthauer said it was a struggle deciding to start bond-based training with the pet dogs in addition to the service dogs.

“It kind of takes a lot to tell an owner that you are going to pet their dog even if he jumps on you,” Witthauer said. “It’s really hard. We absolutely believed it would work. There was no question that it worked. There was a question of whether the general pet population of owners would understand it and if they would like it.”

In the end, Witthauer said it was a question of ethics. Research continued to come out about how dogs learn through bonding, mimicry and demonstration with in their relationships through people.  The more they studied human and animal bonds, the less they were able to justify traditional training.

Roverchase has been using Bond Based Choice Teaching with its training dogs for almost a year now, and started with pet dogs about two or three months ago. So far, Witthauer said they haven’t had a miss yet and all the dogs have been able to do it. The training has also had a positive affect on aggression and anxiety in the dogs.

“We found that when we moved away from behaviorism and toward the bond based training that the anxiety of the dogs — even the good anxiety or happy anxiety — was significantly decreased,” Witthauer said.  “It’s so cool and they can learn everything.”

The Greystone branch of the YMCA held a tennis camp from during the week of July 1. The campers ran... read more