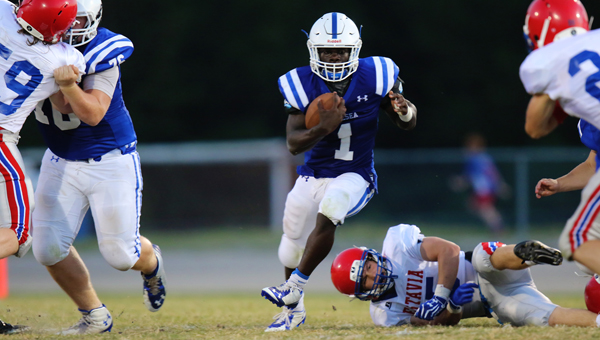 Zalon Reynolds, a rising junior for the Chelsea Hornets, will play an integral role in the Hornets spread option running offense in 2015. (Contributed / Cari Dean)

Let’s have a little fun here. People love their football in Alabama. Like, really love their football. And we are here to give the people what they want. Also, in the spirit of full disclosure, there isn’t a lot going on right now in the sports world, so this little exercise is good for all parties. It’s time for some way-too-early 2015 Shelby County football predictions!

Now that we have that taken care of. Away we go. The Chelsea Hornets are the focus of part one of the way-too-early football predictions.

Last year, Chelsea started out strong at 5-0 through the first half of the season, including blowout wins over Region 3 opponents Valley and Chilton County. From there, the wheels fell off for the Hornets, and they finished 6-4, with their only other win coming in the last game of the season against winless Thompson. The four-game losing skid Chelsea endured between its fifth and sixths wins, unfortunately, came against four consecutive region opponents. Consequently, the Hornets finished fifth in the region and missed the playoffs.

A year later, third year head coach Chris Elmore has to replace some talent on both sides of the ball, primarily at the receivers and defensive line positions. Chelsea will turn to some untested talent in 2015, and will need to stay healthy, especially in the backfield, but has the pieces in play to make some serious noise in the fall.

On the offensive side of the ball, Chelsea’s backfield is oozing with talent, albeit that talent is in part untested and has had health issues in the past. Elmore will hand the quarterbacking reigns over to Matt Marquet, a very seasoned junior. Marquet split snaps last season as a sophomore before earning the job heading into week nine. A gifted athlete, Marquet helped take Chelsea’s basketball team to the 6A Sweet Sixteen, and has more varsity athletic experience under his belt than most juniors. That being said, this will be his first season in complete control of the offense, and while he has the full confidence of Elmore and his coaching staff, is still relatively untested as a full-time starter.

Marquet’s backfield counterparts in Chelsea’s spread option attack will be Zalon Reynolds and AJ Jones, who are both healthy at the same time for the first time in over a year. Jones, a senior, and Reynolds, a junior, both have speed and will bring experience to the backfield. Both will need to stay healthy this season to help take some of the pressure off of Marquet. Elmore likes to utilize a two-back rotation as much as he can, and having his two top backs ready to go will pay large dividends to the Hornets offense.

The defensive unit will live and die by its linebackers. Blake Travelstead, David Hardenburgh and Justin Painter have are all seniors and have all started since their sophomore years. They are the core of what the Hornets will try to do on defense, and will direct traffic on that side of the ball. Elmore and his coaching staff are excited to reap the rewards of the trust they placed in those three in their first season on the job.

The Hornets have to replace playmakers Josh Pugh and Darrell Foster at receiver, and the offensive and defensive line positions have to be nailed down, but this Chelsea team has undeniable talent and ability on both sides of the ball.

Now, for a way-too-early prediction. Opelika, who finished 2014 ranked as the No. 2 team in 6A, despite losing in the second round of the state playoffs to Saraland in overtime, dominated the region last season, going 6-0 and winning each game by an average score of 51-12. However, Opelika’s mammoth defensive end Quandeski Whitlow and quarterback Matthew Christian have moved on to the college ranks, Whitlow to South Carolina and Christian to Murray State in Kentucky, which opens things up quite a bit for the Hornets to make a move.

Way-too-early-prediction: Chelsea takes a few early lumps before finding their stride and finishes 6-4, but has a better showing in the region, and gets back to the playoffs for the first time since 2011.