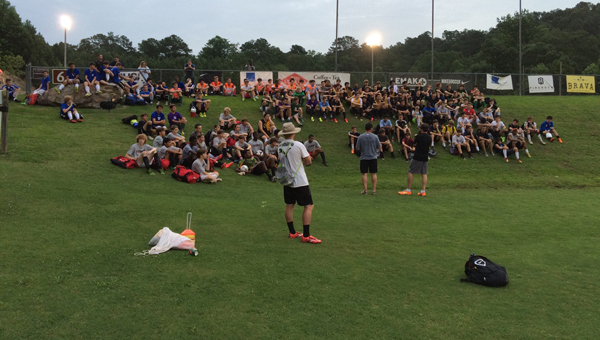 Players participating in the 2015 North Shelby Soccer Camp listen to college coaches talk about playing at the next level. (Contributed)

“The reasoning behind it was, some of our kids can afford to go to these expensive college camps and some can’t,” McDonald said. “Some of these camps are more expensive for a week than a whole season of high school soccer.”

To combat this and to save money, both coaches decided to create a model where college coaches came to them, allowing their players to get the same instruction as at larger camps.

“We want them to get instruction from guys on a college level,” Miller said. “We can learn as coaches from the college guys just like they as players can. It helps them get seen by these college coaches too. It’s a recruiting opportunity for these kids. It’s an all-around good situation.”

The camp has quadrupled in size since Miller and McDonald decided to organize it, with Thompson, Helena, Spain Park and Oak Mountain representing Shelby County, as well as two other schools outside the county. All facets of college athletics, from Division I down to junior college, were represented at the camp this year.

On top of being a great opportunity for the players to get evaluated, it gives the college coaches the same chance.

“The coaches have a chance to evaluate the kids as well,” McDonald said. “They were really honest with the kids as far as what they are looking for.”

The camp, which runs four hours a day for four days, spends two hours working on skills and two hours playing games. It does burn up the four AHSAA-sanctioned team play dates that each team is allowed in the offseason, but both Miller and McDonald believe this is the best possible use of those dates.

“It is absolutely a good use of those four dates,” McDonald said.