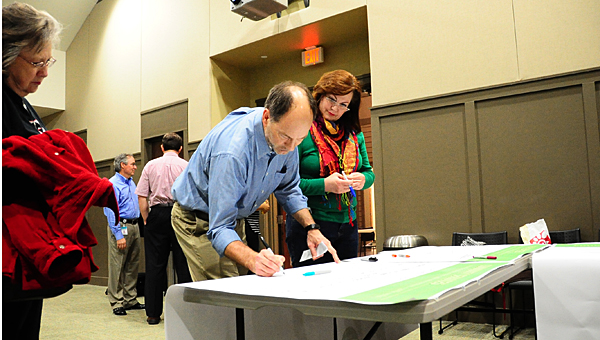 A planning process, including public input sessions such as this one in early 2015, has resulted in several ideas for Alabaster’s future. (File)

ALABASTER – A study conducted through the city of Alabaster’s comprehensive planning process has recommended the city construct a new civic center, make improvements to a major intersection and promote retail growth in two new corridors.

During a June 23 presentation to the Alabaster Planning and Zoning Board, the Regional Planning Commission of Greater Birmingham provided an update on the comprehensive planning process.

The process began in early 2015, and has included several public input sessions, steering committee meetings and online surveys. Once the process is completed, it will update the city’s 2005 comprehensive plan, and will determine future developments in Alabaster.

In its list of preliminary recommendations, the RPC suggested cutting down on the number of driveways along U.S. 31 and Alabama 119, building a civic center and recreation complex and connecting the Medical Mile district near Shelby Baptist Medical Center with the old Siluria Mill neighborhood near City Hall via trails and shuttle services.

In its preliminary proposals, the RPC also identified two areas in need of future retail growth: Industrial Road near Kingwood Church and Shelby County 17 near its intersection with First Avenue West.

“Retail activity in this area of northwest Alabaster is largely absent, causing residents to travel either east to U.S. 31 or north on CR 17 into Helena to spend their retail dollars,” read the recommendation for Shelby County 17.

Vacant property along the north side of Industrial Road would also be well-suited for retail development such as restaurants, small department stores, art and framing shops, home furnishings, electronics stores, health and beauty supply stores, fitness offerings, banks, family medical offerings and pharmacies, according to the RPC recommendations.