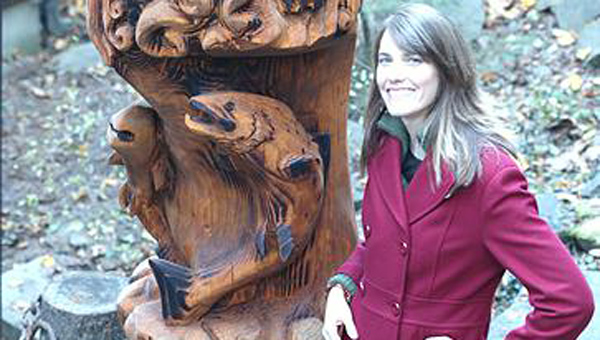 CALERA—Growing up, Heather Bailey knew she didn’t want to be a chainsaw sculptress. Her mother was a sculptress and Bailey knew it could be a tough life filled with weekend competitions and art shows. 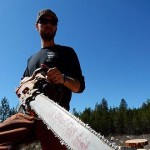 Justin Bailey describes his carving style as more methodical and serious than his wife’s, Heather. (Contributed)

Then in her 20s, Bailey picked up a chainsaw and has kept one in her hand ever since.

“I just loved it. I couldn’t put it down, so I was finally like ‘Oh that’s why my mom stuck with it,’” Bailey said. “I never understood why. I always loved to watch her, and I was always fascinating by it. As far as making a living, it was hard.”

She sold her very first carving, two little trees, and just continued from there. People especially loved her “Rumpelstiltskin” like lighthouses that curved because she wasn’t strong enough to make everything straight yet. It didn’t matter though, people loved the character.

It’s exactly how her husband, Justin, got into wood carving as well. The Calera High School grad was in the Marine Corps out of Birmingham stationed in San Diego, and he met Heather before his second deployment to Japan.

“My first time in Japan, there’s a lot of wood carving over there, and I was really inspired by it,” Justin said. “I never really thought about making a living doing it, I just thought it was cool. (Then I) met her and I couldn’t have my girlfriend one-upping me. So I was like, ‘I’m a marine. I should try this.’”

Justin gave it a shot and found out he had a natural talent for it. His first piece, a little bear coming out of stump, is sitting in his mother’s house, and he was able to trade his second two bears for two chainsaws worth about $500.

“I was hooked,” Justin said. “It was fun, it was adventurous and it was something that I think most people just don’t think about making a living at. That caught my attention.”

Justin and Heather were married about eight months after they started dating, and Justin left for his second deployment to Japan after that. Heather was even able to stay in Japan for a month and conduct a carving demonstration there.

“I started carving with the intention of doing missionary training,” Heather said. “I kind of have a missionary’s heart and I love sharing Jesus with people.”

Previously, she’d worked with a local church that was going to Japan, so Heather worked it out so she could go too. It was a difficult decision for her though because she gave up the opportunity to attend the University of California Long Beach to go to do the apprenticeship in Japan.

Heather travelled throughout Mexico learning the craft, and she and Justin have been all over the country, carving and learning. They had their, now 3-year-old son Eli, and visited every southern state and western statebefore settling down in Idaho and then Calera.

Most of the work the Baileys do are custom pieces where they consult with clients before creating a carving. Heather said they both have different styles though. Heather creates happier pieces, doing a lot of smiling bears and dogs, while Justin said his pieces are more serious.

His favorite piece is a cowboy that he carved for one of his business instructors. They came across a bronze sculpture one day in class, and his instructor challenged Justin to create something like that with a chainsaw in wood. Justin lived up to the challenge.

Heather created a 20-foot wildlife totem pole, and said it is her favorite piece. She’s also created giant spines for chiropractors, but she said the totem pole is one of those things that was the best carving she’d ever created up to that point.

“It’s totally different styles, but the finished product is fairly much the same,” Justin said. “They are just kind of our own. Heather’s are much more playful. Our personalities definitely come out in them.”

The couple recently moved to Calera from Idaho to be closer to Justin’s family and leased a 3,000-square-foot warehouse in Alabaster at 82 Highway 265, suite 606. For more information, visit Heather’s website at Chainsawsculptress.com and Justin’s website at Artbyjustinbailey.com.