COLUMBIANA – A Columbiana woman arrested and charged with one felony count of child abuse on July 2 has been released from jail on a $5,000 bond. 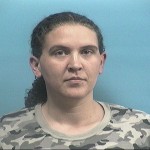 Breanna Raelyn Doss, 24, allegedly “did torture, willfully abuse, cruelly beat, or otherwise willfully maltreat” a child under age 18 “by hands or other weapons (and) caused numerous severe deep tissue bruises upon the victim’s body,” on June 27, according to her arrest warrant.

Doss, who lists an address on Golden Road in Columbiana, was arrested and booked into the Shelby County Jail on July 2. She was released on bond later that day.

“They brought it to our attention, at which point the complaint was investigated by our criminal investigations unit,” Hammac said.

Hammac noted the importance of the SCSO’s partnership with Shelby County DHR and Owens House, and said, “They both play integral parts in cases like this.”

Child abuse is a Class C felony. If convicted, Doss could face up to 10 years in prison and fines up to $15,000, according to Alabama law.