Giangrosso takes the helm as principal of Spain Park

HOOVER—Spain Park High School Principal Larry Giangrosso is no stranger to leadership. His long career in education has taken him across the state, from serving as athletic director at Central Alabama Community College, to head baseball coach at UAB, to assistant principal at Pelham High School. 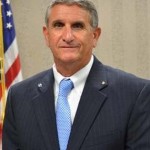 The Hoover Board of Education appointed Giangrosso as SPHS principal during a June 15 meeting, bringing his career full circle. Giangrosso’s education career started years ago at Hoover’s Berry High School, where he served as an English teacher and coach.

“A coach at UAB, Ben Bingham, took me under his wing… he got me hooked in with Coach Finley at Berry High School,” Giangrosso said. “All the stars lined up for me. I stayed there for 15 years, and it was probably one of the greatest experiences I’ve ever had.”

Giangrosso recalls those early years working alongside legendary Hoover football coach, Bob Finley, and his staff as formative in his career.

“Our job is to teach and coach them all,” Giangrosso said, reciting advice Finley gave him. “That’s a thing I’ve never forgotten… It was true then, and it’s true today.”

After coaching and administrative stints at Central Alabama Community College, UAB and Pelham High School, Giangrosso returned to Hoover in 2012 to serve as an assistant principal at Spain Park.

“I always used to hear Spain Park’s diploma really meant something,” Giangrosso said. “When you get here and you see what we have to offer students, and the rigor we provide for them, I understand that now.”

Giangrosso said he looks forward to the new academic year and working with students, teachers and administrators in his new role as principal. However, leading a school of roughly 1,500 students has its challenges.

“Our community set the bar very high,” Giangrosso said. “There’s an expectation, and I think that’s a good thing.”

Giangrosso said he plans to continue to uphold Spain Park’s reputation of academic excellence while offering each student the tools and instruction to lead them on the “path to be successful in life.”

“No one slips through the cracks, everyone gets what they need,” Giangrosso said. “We’ve got to prepare them all, that goes back to what Coach Finley said way back when.”