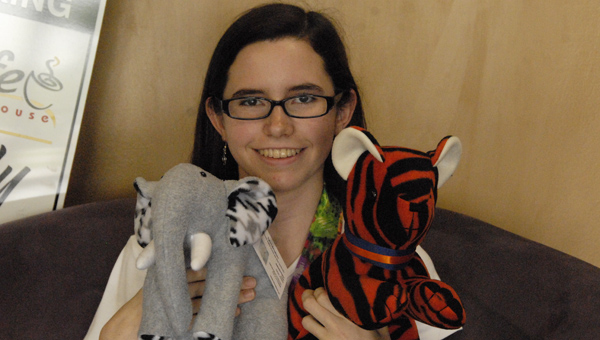 PELHAM—When 18-year-old Katherine Pearce got a book on making stuffed animals for Christmas a couple years ago, she decided she would make one for each of her 40 cousins.

Over the course of a year, she created the 40 stuffed animals as Christmas presents, practicing and learning how to create each of the fleece toys.

“I’d sewn up to that point, but I hadn’t really found my niche of what I wanted to sew,” Pearce said.

Now Pearce manages Kat’s Fabrications on Etsy and Facebook, and at farmers markets like Crosscreek Community Market in her neighborhood. She sells fabric creations like lambs, bunnies and owls, but her favorite to make are the dragon patterns she has. Of course, in Alabama, Pearce said the elephants and tigers are her best sellers.

“When I was younger I had a lot of stuffed animals,” Pearce said.  “I’ve made elephants for people of all ages and I think everybody likes a cuddly friend. I don’t think there is an age limit on stuffed animals.”

While Pearce does most of the sewing, her booth at the markets is a family affair. Her mother helps her sew bows, her 15-year-old sister Maria makes greeting cards and her 11-year-old brother Jonathan helps set up the tables. Pearce also sells colored glass jars and some small hair accessories.

“People love them,” Pearce said. “(I love) getting to talk to people and seeing what other people make. I’ve met a couple other people who sew and it’s neat to see what they’ve made and what they use.”

She wasn’t always a great seamstress through. She attributes her success to her mother who used to make smock dresses for her as a child. Whenever Pearce has a problem with sewing, her mother is always there to help.

Pearce will be a senior this year as a part of Evangel Christian School. She plans to figure out a way to spend the rest of her life sewing. Eventually, she’d like to learn how to make her own clothing patterns.

“When I was little, all the other kids knew what they wanted to do when they grew up,” Pearce said. “I had no clue, but recently when I started sewing I figured out this is something I can do for the rest of my life. It’s something you can do from any place.”

A number of local schools take part in team…