Then and now: The transformation of Old Town Helena through the years 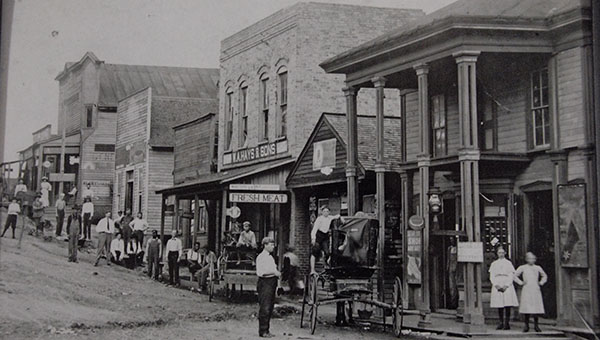 This is a photo of Main Street in Old Town Helena in 1910. This area flourished in the early 20th Century and was considered a main area of town for many Helena residents. (Contributed)

HELENA–Old Town Helena is considered one of the most iconic and historic sections within the Helena city limits, but how has this part of town changed within the last 100 years, and become known what it is today?

The city of Helena has a rich history, and a lot of the history is centered around Old Town Helena and the railroad tracks.

In 1863, the Confederate government built a rolling mill and around that same time the railroad came through.

After the Civil War, the railroad was rebuilt around 1872, and that’s when most of the stores and major activity moved down toward the railroad tracks, according to Helena Museum director and curator Ken Penhale.

“Five or six years after the Civil War is really when things started flourishing,” said Penhale. “When they rebuilt the railroad, that’s when things really broke loose down here in Old Town. It flourished, and there was quite a lot going on here until the 1920s. You had a number of stores, barbershops, doctor’s office, dentist office, cleaners, shoe shops and more down here.”

In 1933, Helena was hit by a devastating tornado that destroyed much of the town, but miraculously the majority of Old Town Helena was not affected by the storm.

“The only thing the tornado really damaged was one brick building in Old Town, it sucked the front out of it and it got the top of the Davidson house behind it,” said Penhale. “Other than that, it didn’t bother any of the other structures or the railroad tracks.”

Although the actual buildings weren’t physically destroyed by the tornado, Old Town still took a hit after the tornado in an economic form.

The tornado displaced many families and destroyed many businesses. Because of this, it took Helena many years and decades to recover to what it once was.

In the late 1990s, there were plans in the works to try and make Old Town Helena an attractive place for those to visit, and Joseph Habshey was one of those responsible for helping to restore some of the buildings in Old Town. He believes Old Town will continue to flourish and praised the current City Council members for their work and interests in Old Town.

“Old Town is definitely a plus for Helena,” said Habshey. “I think Old Town is on its way. The future of Old Town is dependent upon the citizens of Helena shopping there, and if they want this to stay what it is today, they will support the merchants that’s down there.”

Present day Helena is now home to many of the city’s most popular restaurants and businesses. The Coal Yard Bar and Grill in Helena shows off much of the town’s history with coal, and is located at one of the original restored buildings. The Depot is considered another Helena favorite.

The annual Buck Creek Festival is held near the railroad tracks, and this past year the festival raised the most money in more than a decade and is another reason residents find Helena special.

Times change and businesses come and go, but for the city of Helena, Old Town is a staple and will continue to flourish as long as there’s support.

Birmingham Academy of Dance to open on U.S. 280