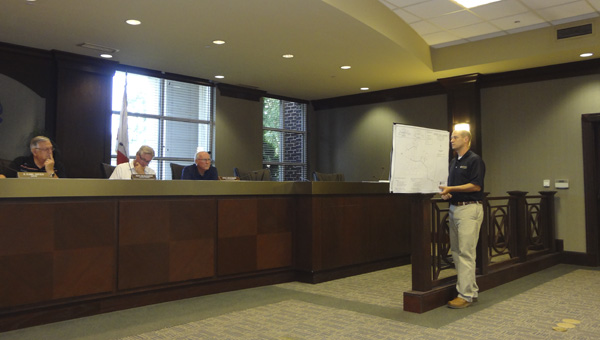 CHELSEA – Plans for a proposed subdivision off Shelby County 47 in Chelsea moved forward July 7 as the City Council voted unanimously to rezone the property that will comprise the development.

The council’s decision came after a public hearing was held for the rezoning request submitted by Del Clayton to have two parcels of his land changed from agricultural-residential to residential to allow for the proposed 140-acre subdivision, White Oak Manor, to be subdivided into 16 lots.

“The intent is to make 16 lots out of it,” Ben Watson, professional engineer with InSite Engineering LLC, said of the subdivision plans, noting that the average lot size would be about 8 acres, and the smallest about 5 acres.

John Bosshart, a resident in the area, asked whether the subdivision would be divided into lots smaller than the preceding estimates.

Chelsea Mayor Earl Niven said the developers could not create smaller lots without first presenting such plans to the city and receiving approval for another rezoning request.

Plans for White Oak Manor include a front gate and one house per lot.

Prior to the hearing July 7, the council received and reviewed Clayton’s request in early June as a recommendation from the Chelsea Planning Commission.

•Approved a resolution to arrange payment of $20,000 to Shirley Brothers Excavating Inc. from funds in the contract agreement between the city and Baird Contracting Inc. The resolution concerns work on the road and waterline near the Chelsea Sports Complex on Shelby County 11.

•Approved another resolution involving Shirley Brothers Inc. for the construction of about 100 additional parking spaces at the sports complex near three baseball fields. The cost would be less than $24,000, Niven said.

•Conducted a community forum discussion about the sports complex project during which council members and city officials shared ideas about potential amenities at the complex.