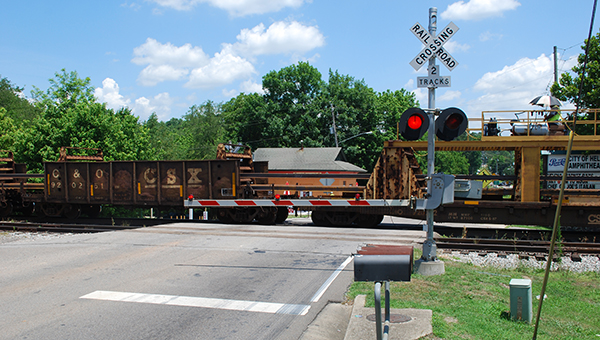 HELENA–Helena City Council members discussed the possibility of installing a pedestrian crosswalk at the railroad tracks in Old Town Helena sometime in the future during their July 6 pre-council meeting.

The item was listed on the pre-council agenda as “proposals for a pedestrian crossing at Old Town train tracks,” and Helena Mayor Mark Hall said the discussions for the potential crossing was just to get the ball rolling and gauge interest from other council members.

“What this is is just a fact-finder right now,” said Hall. “What we want to look at is right there in Old Town at the first set of tracks where Coal Yard is on the left and you go across the tracks to the amphitheater.”

Currently, the only way to cross the train tracks in Old Town is to either walk close to the road or step directly over the tracks, and Hall said he would like to see a pedestrian crossing in the future mainly because it’s a safety issue right now.

“This past Friday night, there was a lady with a wagon full of children with an arm full of stuff going across the tracks to find a place for the fireworks, and she’s lifting that wagon over those tracks,” said Hall. “I think it might save an injury to a pedestrian and then make that area a lot more pedestrian-friendly.”

Hall said that he has already begun discussing the matter with CSX officials, and they are aware of the issue and seem to be in favor of studying the installation of the crossing.

Helena Councilman Mike Jones also agreed with Hall that this was a project that needs to happen.

“I think it’s a great idea, and we’ve needed it for years,” said Jones.

Hall said the crossing would most likely be a prefabricated, simple crossing that would make the walk from the amphitheater to the other side of the tracks much easier on the pedestrians.