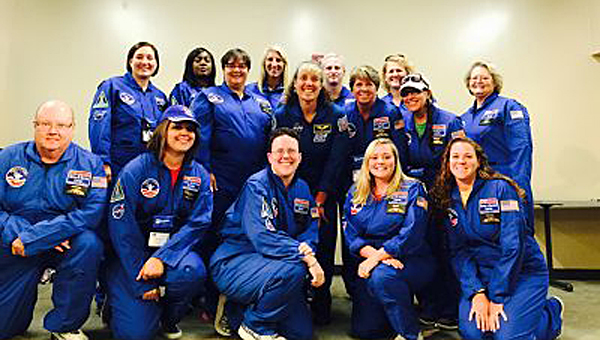 This summer, 68 teachers from Alabama attended Alabama Space Academy for Educators at the U.S. Space and Rocket Center in Huntsville. This program was made possible through funding from the Alabama Legislature.

The funding from the Alabama Legislature was given so that the U.S. Space and Rocket Center could bring one teacher from each school district to participate in Space Academy for Educators free of charge.

Susan Green, a chemistry and physics teacher from Shelby County High School, was one of the teachers who attended the program this summer alongside her colleagues from the Pelham City School System. Green said that the teachers in the program “ranged from one year of experience to 47 years of experience and (taught) from first grade to high school.”

Green said her favorite part of the program was “getting to work on a team with other teachers from all over the state to overcome the challenges the program set before us.” She went on to say that her team won the award for Best Mission because of how well they worked together to “avert near-disaster” during their Shuttle Mission.

“From the cheering in Mission Control, you would have thought we’d really just saved our teammates’ lives,” Green said.

Green said that Space Academy for Educators was “the best professional development (she has) ever experienced in 12 years as a science teacher.”

“It’s unlike any other opportunity a teacher will ever have, short of actually becoming an astronaut,” Green added.

Green plans to implement the things that she learned, as well as some of the hands-on lab activities, into her classes in the upcoming school year as well as years to come.

“I could be teaching someone who will one day walk on Mars,” Green said.