HOOVER—A Birmingham man was taken into custody after allegedly attacking another man with a box cutter in an altercation over a misplaced Xbox game. 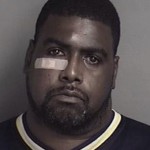 At approximately 10:02 p.m. on July 1, the Hoover Police Department responded to the emergency room at UAB Medical West where the 21-year-old victim was being treated for non-life threatening knife wounds.

The victim reported being assaulted inside an apartment at Heather Lake Reserve in Inverness “after he and the suspect argued over a misplaced Xbox game,” a Facebook post from the Hoover Police Department read.

According to the post, the police responded to Heather Lake Reserve apartment and located the suspect, Larry Jay Thomas Jr., 40. Thomas was arrested and charged with felony second degree assault on July 2.

According to the arrest warrant, Thomas allegedly did “commit the crime of assault second degree with intent to cause physical injury (to the victim)… by means of a deadly weapon.”

Second degree assault is a Class C felony and punishable by up to 10 years in prison upon conviction.

Thomas was released from the Shelby County Jail on July 3 after posting a $5,000 bond.

Dr. Andrews to be inducted into American Orthopaedic Society…