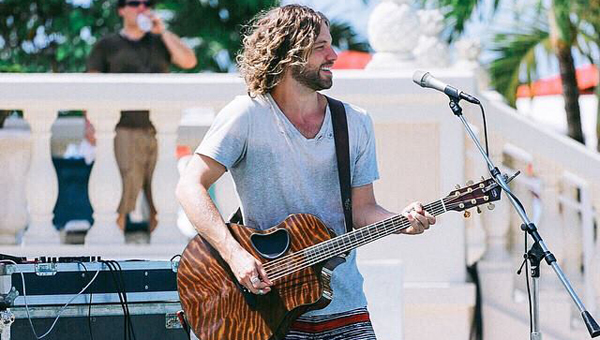 American Idol competitor Casey James is Pelham Palooza’s headliner July 18. He will be sharing songs from his self-titled debut that was released in 2012, featuring his most well-known for his single “Crying on a Suitcase.” (Contributed)

PELHAM—The countdown to Pelham Palooza has begun, and the city continues to add new vendors and demonstrators to the mix. More than 100 vendors are signed up to participate in the July 17 and 18 event.

The event kicks off at Oak Mountain Amphitheater July 17 at 7 p.m. as a part of 103.7’s free Just Show Up Show featuring Echosmith. The indie, 80s dance-rock-influenced band is composed of Graham, Sydney, Noah and Jamie Sierota and is most know for its songs “Cool Kids” and “Bright.”

“We’ve just broadened our horizons to encompass everything that’s great about our city,” said event coordinator Paula Holly. “We have gotten great feedback, especially about having Echo. I’ve had people as far away from North Carolina call…The music is a big draw.”

Saturday’s festivities feature a conglomeration of music, demonstrations, food and shopping with special guest American Idol’s Casey James taking the stage to finalize the evening. The day starts at 9 a.m.

Musical performances on Saturday will be outside of the Pelham Civic Center and Ice Arena, kicking off with Alabama’s own Sweet Tea Trio at 11:50 a.m. Country musicians Henri’s Notions will take the stage at 12:55 p.m. followed by Earthbound at 2 p.m., Rollin In the Hay at 3:05 p.m. and Act of Congress at 4:10 p.m.

Casey James begins at 5:15 p.m. with his alternative, acoustic and bluegrass style songs. He will be sharing songs from his self-titled debut that was released in 2012, featuring his most well-known for his single “Crying on a Suitcase.”

Inside the complex, Pelham will showcase some of its most popular outdoor sports in the city, including demonstrations from Harley-Davidson, Oak Mountain State Park and the Alabama Wild Life Center.

In addition to dishes prepared by the chefs, Pelham Palooza will feature food vendors from local restaurants such as Frios Gourmet Pops and Bayou Billy Sweet Dixie Tea. There will be about 100 vendors and organizations represented from all over Pelham such as Scuba Ventures, Younique Cosmetics, Scott’s Builds and Parrots of Pelham.

Pelham Palooza is a free event open to the public. For more information and a full list of vendors, visit pelhamonline.com/pelhampalooza/.