It’s berry-picking time and for Mary Perko, a fine craziness takes over. 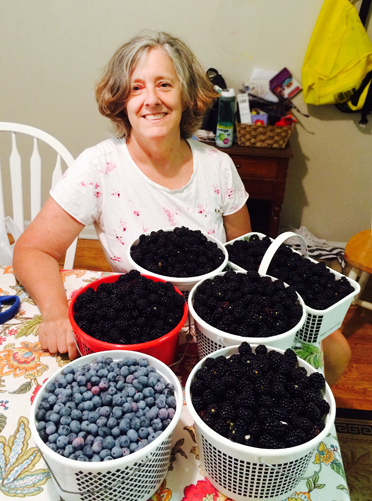 Mary Perko gives her signature blackberry jam away to deserving friends, but also plans this year to sell it. On her initial foray, Perko picked 30 pounds of berries in under two hours and made 24 jars of jam. (Contributed)

Perko, canner of jam, baker of homemade bread and the person responsible for bringing so many well-known chefs to the Helena Farmers Market over the years, is dedicated to her annual jam-making sessions.

“Making jam only looks intimidating and time consuming,” Perko asserts. “A five-pound bucket of berries takes less than 30 minutes to pick at Petals From the Past. Blackberries are great for jam, cobblers, smoothies, sorbets or eaten fresh and simple.”

Petals From the Past Garden Center and Farm is Perko’s go-to picking place for blueberries and blackberries in Jemison.

But then, Perko is very practiced.

“As my sister would say,” Perko smiled, ”Easy peasy! Freshness is key. Pick and make the same day. One five-pound bucket of berries will make about eight jars of jam.”

“Basically, use four cups of mashed berries, seven cups of sugar and one envelope of pectin,” Perko shared. “I use one pan for mashing the berries. After mashing, put into another pan with sugar. Stir on medium heat then turn to medium high.”

Bring to a rolling boil for two minutes, then add liquid pectin and stir constantly until mixture comes to rolling boil again. Boil for one more minute, then remove from heat.

Pour into hot jars up to 1/2 inch from top. Very important: Wipe tops of jars clean with hot wet towel, put lid on and turn upside down for seven minutes. Turn over and place on towels. This works for blackberries. Other jams require putting the jars in a canner and bringing the water to a boil for proper time.

“While preparation is underway, keep the kids away from stove and jars, as they are hot and anything that gets juice on is more or less permanent,” she said.

Perko covers her counters with newspaper.

“But don’t leave out children when you go picking,” Perko added. “My mom used to take us—those low hanging berries are perfect for children and they can mash the berries too.”