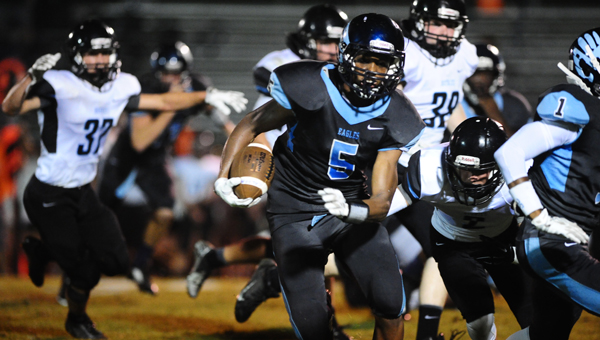 Kyle Harrell will move from wide reciever to running back in 2015 for Calera to help replace the absence of ShaKeith Tyes. (File)

Part four of the way-too-early football prediction extravaganza takes us to the southern part of the county, where the Calera Eagles sit, waiting with bated breath to see how their season might, but probably will not, play out.

Problem number one for the Eagles, ShaKeith Tyes is gone. Tyes, the school’s all-time leader in touchdowns scored, total offense, rushing yards and yards per carry, will not boulder his way down any more high school fields, as he has moved on to the college ranks. If head coach Wiley McKeller and company expect to repeat last season’s offensive bonanza that saw the Eagles average 42.7 points per game, they’re going to need to find a way to replace the 2,500-plus yards Tyes accounted for last year.

But some good news for the Eagles! It takes 11 guys to field a team in American-style football, and one player does not a team make. One of those 11 kids on offense will be Ty Evans, who will be under center for his second full season. According to McKeller, the senior has a better arm than his predecessor, current Crimson Tider Ronnie Clark, and quarterbacked the Eagles to a 10-2 record last year before losing a heartbreaking, double overtime classic to Greenville in the second round of the playoffs. Evans has an above average arm and is a more than capable runner. He’s got the keys to Calera’s high-powered offensive engine, and what he does with them will correlate directly to the Eagles’ win-loss column.

Alongside Evans in the backfield will be a familiar face beside a new one. Kyle Harrell and Charles White, both seniors, will shoulder the load of replacing the most productive offensive player in the history of the school. White, a Calera native, transferred from Kingwood Christian School after last season and will suit up for the first time, while Harrell has spent the last few years as a receiver for the Eagles. McKeller is incredibly high on both, and much of what Calera tries to do on offense will focus on getting one of these two the ball.

When the offense sputters, Calera has probably the best safety net in the state in punter/kicker Zach Gaines to bail them out. Gaines, who will also moonlight as a receiver this season, has a laughably impressive leg. His Youtube video looks like it has been doctored. Gaines can bomb a punt over 70 yards on the fly, and can hit field goals in excess of 50 yards. This is not a very common statement, but Calera’s punter/kicker will, at times this season, undoubtedly alter the momentum of the game.

A return to the playoffs is all but inevitable for this team, even without Tyes and both of last season’s impressive defensive ends. The Eagles finished second in Region 4 of Class 5A, behind only Demopolis. Calera was the only team out of the region to win a playoff game, and Demopolis’ head coach Tom Causey has moved on to Pelham. If Calera’s backfield stays healthy, and wide out Tray Jones can turn into a outside threat, and junior twins Jaramy and Alex Dozier can hold down the defense from their linebacker positions, this team will make some noise.

Way-too-early prediction: Calera takes a little bit of time to get the pass/rush balance down on offense, but when they do, it becomes fun to watch. The defense is vulnerable in some areas, especially at corner, where there is a revolving door of players who see time. The offense masks the defensive liabilities well, and Evans develops into a superb game manager. The Eagles drop one game in the region, but make the playoffs again easily, where they make sure not to have a repeat of last season’s crushing loss, and win two games in the playoffs.