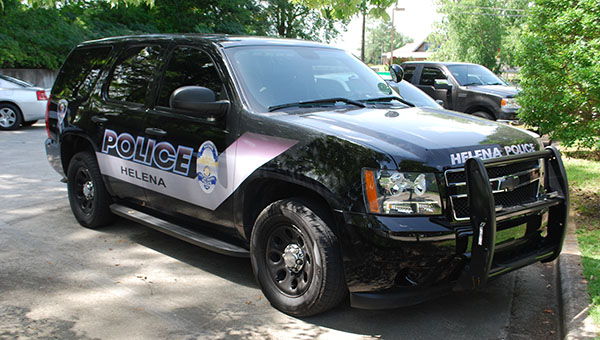 The new Helena Police Department Tahoes have been saving the city thousands of dollars within the past year. (Reporter Photo/Graham Brooks)

HELENA–Some interesting figures were brought up at the Helena City Council meeting on Monday, July 6, and that’s the fact that the recently acquired Chevrolet Tahoes for the Helena Police Department has been saving the city thousands of dollars in repair costs in the past year.

Helena Councilman Mike Jones brought up the figures and congratulated Helena Police Chief Douglas Jones during the council comments portion of the meeting.

“I want to make it a point to recognize Chief Jones and the Police Department,” said Mike Jones. “We were talking right before the council meeting and for years and years and years we’ve had police cars that were extremely aged and most of them were falling apart. We worked hard for a very long time for a couple of years it seemed like to try and find some kind of solution. This council and the mayor worked to try to figure out a way to fix the problem.”

According to Jones, the police department was able to acquire a couple of used Hoover Tahoes and eight new Tahoes to replace the old cars in the fleet and the savings have shown in the past year.

“I want to point out something in our budgeting here,” said Jones. “Last year, before we passed budget we were spending $42,000 in repairs and maintenance in just the police department alone. We’ve budgeted $24,000 this year to take into account the newer Tahoes helping us a little bit, and so far, with just three months left to go, we’ve only spent $13,000. That is unheard of, hats off to you chief and great job.”

Helena Mayor Mark Hall said one of the first things he looked at once he took office three years ago was the aging police vehicle fleet.

“It became obvious that we were spending an exorbitant amount of money on the older vehicles so we decided to begin replacing those,” said Hall. “We bought eight new police package Tahoes and acquired two used police Tahoes from Hoover PD to replace 10 of the oldest units in the police fleet. The savings we have seen in maintenance costs has been well worth the investment. We will look at our options again this budget year to replace up to five more of the older vehicles to further reduce our maintenance costs.”

Police Chief Jones said he likes the Tahoes much better from the standpoint that the vehicles are much safer for his officers.

“We have more room, the officers actually have a better view of the area and if somebody walks up to the vehicle they’re looking at you straight on, whereas if you’re in a regular vehicle they’re looking down at you,” said Jones. “I think just overall when you have a chance to put an officer sitting up a little higher, whether it’s an accident or being approached in a vehicle I think the advantage is to the officer.”