COLUMBIANA – A 24-year-old Columbiana man was arrested on a first-degree assault charge after a July 4 incident left two people with gunshot wounds. 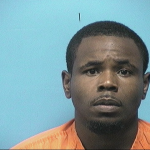 Johnny Darnell Hardy, who lists an address on Old Alabama 25, was arrested by Columbiana police and charged with one felony count of first-degree assault following an alleged “disturbance call” at a residence on Chapman Drive in Columbiana, Police Chief Lamar Vick confirmed on July 7.

“We answered some type of disturbance call around 8 p.m. on the Fourth of July,” Vick said. “The report was domestic with a weapon involved.”

Vick said the weapon was a small-caliber handgun.

When officers arrived on the scene, they found one adult male victim, identified by Vick and court documents as Patrick Alonzo Jackson, with a gunshot wound to the stomach.

“He was actually treated by rescue and transported to UAB Hospital in Birmingham,” Vick said. “The other victim that was involved was a female. She had left the scene by private vehicle and was en route to Shelby Medical Center prior to our arrival.”

Vick said the female victim, whose name he did not confirm, was treated for a gunshot wound to the arm and released from the hospital within 12 hours after the incident, which took place at Jackson’s home.

Vick identified the female victim as Hardy’s girlfriend and the stepdaughter of the male victim, Jackson.

Hardy drove the female victim to the hospital, where officers “intercepted” him and “brought him in for questioning.”

As of July 7, Vick said the male victim is still in the hospital and undergoing surgery.

Vick said the events that led to the shooting remain uncertain as the investigation continues.

“At this time, we’re still actively investigating that,” he said. “There’s different stories there.”

Vick noted that Hardy has been charged with only one count of first-degree assault, a Class B felony.

A preliminary hearing for Hardy is scheduled for July 30 at 8:30 a.m. before Judge Dan Reeves.