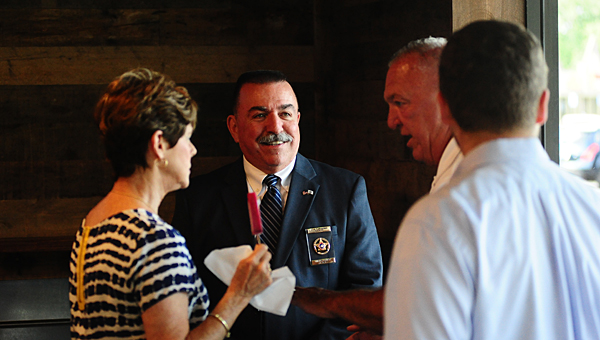 ALABASTER – In the wake of a pair of missing person reports within a week of each other, Shelby County Sheriff John Samaniego sought to dispel rumors regarding such reports during a July 8 visit to Frio’s Gourmet Pops in Alabaster.

Samaniego spoke briefly about the pair of missing person cases during the public meet-and-greet, which was sponsored by the South Shelby County Chamber of Commerce.

On July 7, the Shelby County Sheriff’s Office reported 18-year-old southern Shelby County resident Haleigh Green missing. According to the Sheriff’s Office, Green was last seen in the area of Egg and Butter Road in Columbiana on Monday, July 6, and did not attend her classes at Lawson State Community College on July 6 or 7.

Samaniego said the Sheriff’s Office was not involved in the Harpersville missing person case, but said it is “doing everything we can” to help locate Green.

“We are continuing our search. We are running every lead we can get. It’s in the national computer,” Samaniego said. “More than 1 million people have seen our post on Facebook. It’s a very difficult situation.”

Samaniego encouraged the about 15 local residents, local and county officials in attendance to notify law enforcement immediately if they believe someone is missing or in danger.

“One of the big misconceptions is that there is a period of time before you can report someone missing,” Samaniego said. “That is absolutely not true.”

Samaniego praised local police departments, such as the Alabaster Police Department, for having positive working relationships with the Sheriff’s Office.

“(Alabaster Police Chief) Curtis (Rigney) and I have a great relationship. We really work well together,” Samaniego said. “With Alabaster being the largest city in Shelby County, we have more of an opportunity to interact with the people here.”