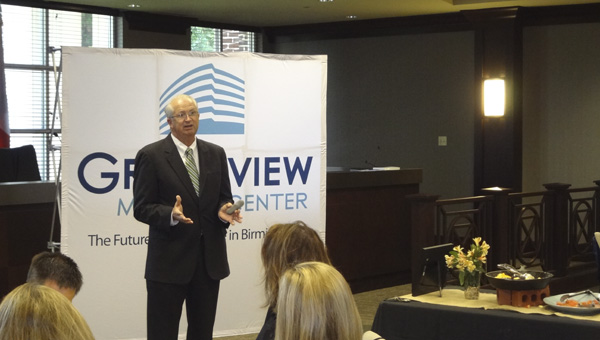 CHELSEA – Area business representatives heard a comprehensive overview of Trinity Medical Center’s new location opening on U.S. 280 in October from the head of the company on July 8.

Keith Granger, Trinity’s president and chief executive officer, talked to nearly 50 people at a Chelsea Business Alliance meeting about the hospital’s upcoming move from Montclair Road in Birmingham to U.S. 280 near the Cahaba River, where its name will change to Grandview Medical Center.

“We consider this to be a very important location for us in the future,” Granger said. “It will be the kind of thing we can all be proud of.”

The Grandview campus will include a 1-million-square-foot hospital with 372 beds, spacious patient rooms and 30 operating rooms; new equipment and technological amenities; a medical office building; and a parking deck connecting the two facilities that will contain more than 3,000 spaces.

Construction on the facility started in December 2013, after Trinity acquired the property in a lengthy legal process.

When Trinity filed its certificate of need in late 2008 to relocate to the facility Health South began constructing on U.S. 280, Brookwood Medical Center and St. Vincent’s Hospital contested the need for the facility in that area, Granger said.

But in 2010, an administrative law judge ruled in favor of Trinity moving its Montclair Road facility to the former Health South building, located just north of the Shelby County line.

Trinity officials wrote in press release at the time that Health South initially invested $225 million in the facility, which never opened, and that Trinity was prepared to invest another $280 million to complete it.

On Oct. 10, Trinity will transport its patients to the new facility over an eight- to nine-hour period with 30-35 ambulances.

Granger said the for-profit facility offered $73.9 million in uncompensated and charity care in 2014.

Increase patient safety and satisfaction during treatment is paramount in Trinity’s services, he said.

“Having a safe and reliable environment is a key component of who we are,” Granger said. “It’s about getting patient care right.”

The Grandview campus will have a final state inspection in the next 30-45 days, followed by receiving a certificate of occupancy.

A widening project on U.S. 280 between the Cahaba River and Interstate 459 will include the construction of additional turn lanes at the Grandview campus to help with traffic flow.