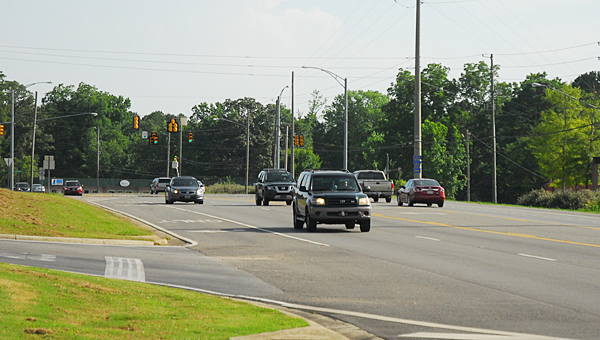 Alabama 119 currently shrinks from four lanes to two lanes at its intersection with Shelby County 26 near the Publix shopping center. (File)

ALABASTER – Environmental and design studies are nearly complete on a project to widen Alabama 119 in Alabaster, and the city likely will begin property acquisitions for the project within the next few months, according to city leaders.

Alabaster City Manager George Henry said he expects design and environmental studies to be completed “by early fall,” and said the city will begin meeting with property owners along the corridor shortly thereafter.

The city began planning for the project, which will widen Alabama 119 south of its intersection with Fulton Springs Road, more than a year ago, and voted to fund the studies in summer 2014.

During an August 2014 meeting, the Alabaster City Council voted unanimously during the meeting to spend $30,740 to match $122,960 in federal funds to pay for a topographic survey and corridor study on the widening project. The Goodwyn, Mills and Cawood engineering firm is conducting the studies.

Henry previously said the studies, once completed, will determine what the widened road will look like and where the widening project will stop. Alabama 119,which is a main business corridor in the city, currently is four lanes between U.S. 31 and Fulton Springs Road, but shrinks to two lanes south of Fulton Springs Road.

The widening project likely will four-lane the highway from Fulton Springs Road to Shelby County 80.

Once the studies are completed, Henry said city officials will begin meeting with property owners along the proposed widening route in an attempt to negotiate “reasonable” right-of-way purchase prices.

“If right-of-way gets too costly, then the project could die,” Henry said.

In December 2013, the City Council voted to approve an agreement with ALDOT to install traffic lights at the intersection of Alabama 119 and Shelby County 80. Through the agreement, ALDOT provided $450,727 and Alabaster provided $222,000 to purchase and install the new traffic signals. The signals were installed with the widening project in mind, and can be modified if additional lanes are added.